Michelle Tea is the author of the new tarot how-to and spell book Modern Tarot: Connecting to Your Higher Self Through the Wisdom of the Cards, which—amazingly—can be used with any deck. Here, she details why these four are her favorites.

I’ve been reading tarot for more than 30 years, and have an amassed a collection of over 30 decks. Here are some of my top picks for sale on Bodhi Tree, complete with iconic images, symbolism, visionary illustrations and cats. Yes, cats. 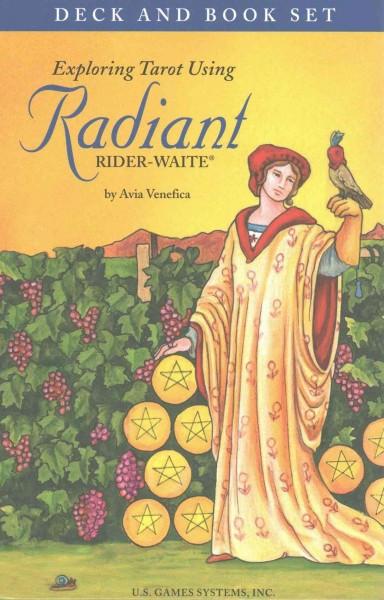 I’m joining tarot scholars in referring to this classic deck as the Waite-Smith, restoring lost credit to artist Pamela Colman Smith, a bisexual, bohemian woman who, through her occult explorations, found herself commissioned to illustrate a deck for A.E. Waite. Smith, known as “Pixie” to her friends, finished the deck in six months, and wrote in a letter to her mentor and supporter, photographer Alfred Steiglitz, “I’ve just finished a big job for very little cash!”

Working off images from the fifteenth-century Sola Busca tarot—the first to use illustrated scenarios to represent the energy of the cards—Smith infused the deck with her romantic, art nouveau aesthetic, layering symbolism and using friends as models. Her images are now what we think of when we think of the tarot: iconic, like Death astride his pale horse, or the glimmering Star in all her mystical glory.

This is the deck I began reading from in high school, when a friend gifted it to me, and since it is the deck most others derive from, it’s a great one for beginners and a must-have for any collection. The originals are lost to history, and Smith’s name was removed from the box and replaced with the publisher’s. I say, Bah! Let’s honor this important mystical artist by allowing her illustrations, inspired by the early 1900s world she occupied, to sink into our psyche, stimulate our intuition and guide us through our days. For those who find themselves getting fully obsessed with Ms. Colman Smith (like me), there is also Pixie’s Astounding Lenormand, a classic fortune-telling deck fashioned by a devoted fan with art from the Waite-Smith tarot as well as illustrations she did for the folk song “The Golden Vanity.” 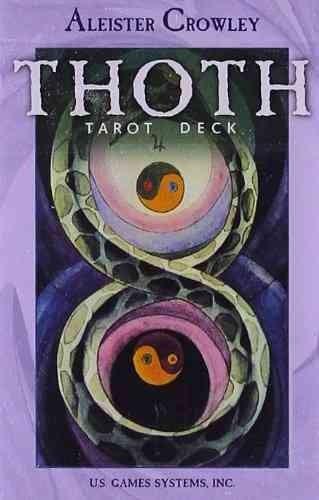 This was the second deck I acquired in my education. After the soft, watercolor aesthetic of the (Rider) Waite-Smith deck, the art in the Thoth was like an exhilarating clobber to my imagination. Muscular and stylized, the Thoth deck features groupings of the suit rather than pictorial scenarios, but the energy of each card comes through full-force thanks to the details conceived by drug-addled mystic Aleister Crowley, and executed to perfection by Lady Frieda Harris. The cards convey an incredible power, which I believe can energize your readings if you’re not intimidated, as many readers seem to be. Don’t let this deck spook you; it’s no more or less dark than any other tarot, with the normal amount of golden, glowing cards to offset the ones featuring blood-tipped swords or pond scum.

Crowley’s initial intent was to simply give the cards an update. But the creation of the deck took five years, and both Crowley and Lady Harris died before they the cards came into the world in a 200-deck printing. Lady Harris was the 60-year-old wife of a wealthy politician when she took on the project, and it was she who pushed Crowley to leave the traditional tarot behind and instead create this deck, which displays the sum of the scholar’s vast knowledge of symbolism, Western magic rites, astrology, Qabalah, and more.

No worries if you don’t know any of this stuff; though layered with occult “Easter eggs” for the obsessive, the Thoth is a very user-friendly deck, with the dominant energy of each card boldly listed: Success, Wealth, Pleasure and Ruin are some card titles. I have found the astrological markings of each card to be quite helpful, deepening my understanding of both tarot and astrology, and a cursory exploration of Qabalah (if there is such a thing) can provide an understanding of the cards’ numerical properties that can be brought to most all decks.

Rather than be paid, Lady Harris gave Crowley a regular stipend as he labored on his part of the project, the accompanying Book of Thoth, a fascinating but dense book of mystical philosophy that is not necessary for reading the cards. Instead, I recommend Gerd Ziegler’s Tarot: Mirror of the Soul, which brings a lightness to the notoriously heavy deck, as well as Magick Altman’s Magick Tarot, which has a vein of social justice concern running through the text. Lady Harris worked like a beast on this project, sometimes producing as many as eight versions of her intricately detailed paintings before landing on one Crowley felt was most accurate. The Thoth deck I acquired many years ago came with two versions of the Magician card, and I wish another edition would be released that includes more of her alternates. The artist never wished to be known for her work—a true masterpiece—and left the originals to a friend of Crowley’s after passing away in India in the early ’60s. 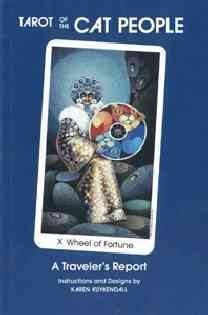 Tarot of the Cat People

Of the many decks that make up the subgenre of Cat Tarot, this one is by far my favorite. It’s the creation of multidisciplinary, wildly imaginative artist Karen Kuykendall, and although the illustrations on their own would be enough, there is way more to this deck than meets the eye. The world of Tarot of the Cat People is populated with a multiethnic cast of richly robed, big-haired cat lovers, and it is a huge relief from the relentless white Euro-centrism of most decks. The cards correspond generally to the (Rider) Waite-Smith, with these fantastical people, bedecked in feathers, jewels and headpieces that would make Lady Gaga envious, standing in for the simply clad folk in the original.

In addition to creating these sumptuous images, awash in mesmerizing swirls and pebbles of color, Kuykendall—who has, sadly, passed—created a vast backstory for this deck, situating it in an otherworldly landscape she called The Outer Regions. Comprised of individual landscapes, each one named for a crystal, they are populated by people with appearances distinct to their world, but all share an attunement with nature, a predilection for super-groovy, luxurious robes, and a profound connection to their feline animal companions. You do not have to know anything about The Outer Regions to know that the major and minor arcana of this deck comprise a true world, and to have the pleasure of entering it. The cats—from cuddly kittens to sinewy panthers—are gorgeous and shown in the mystical light that cat lovers know them to possess.

Kuykendall was a real visionary, and though her collection remains in storage at the Mesa Museum in Arizona, we are so lucky that she created this collection of 78 artworks that we get to live with and learn from. 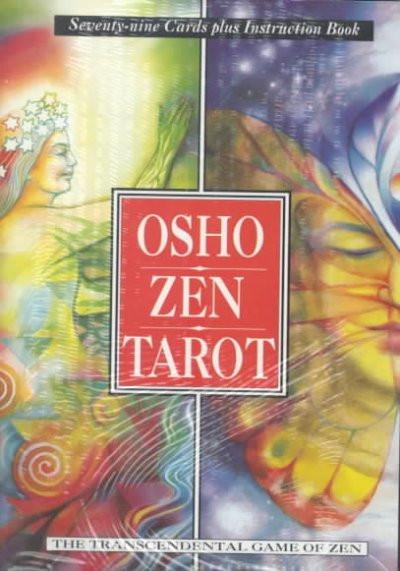 Osho is the final chosen name of Indian guru Rajneesh, a controversial spiritual philosopher whose likely narcissism, combined with a wild, free-thinking intellect, made him something of a cult leader in India and the US in the ’80s. Outspoken against socialism—even dissing Gandhi—he was a strong proponent of capitalism and referred to himself as “the rich man’s guru.” His work was supported by a string of wealthy American women, one of whom helped him move his ashram to Oregon when the Indian government turned against him. It didn’t go too great for him in the Pacific Northwest, either; his benefactor took the fall for a series of crimes, including attempted murder, that it appears Osho was aware of and allowed to happen, even encouraged.

The first official act of biological terrorism in the United States was committed by one of Osho’s disciples: a salmonella attack in The Dalles meant to influence an election. If after hearing about all this scandal you think, Why no, I do not want a tarot card deck created by such a man!, I certainly understand. But in spite of its creator’s diabolical madness, the Osho Zen Tarot is quite a good deck.

The Osho Zen Tarot marries the movements of the traditional tarot with Zen Buddhist precepts, and the match is good: the feminine, fecund productivity of the Empress manifests as Creativity; a masculine ruler from within the court of the Wands is given the title Creator and depicted as Buddha; and the limbo-ness of the four of swords is enhanced by naming the card Postponement and showing a black-and-white figure looking out a window onto a Technicolor landscape. The color palette here is whimsical and rainbow, often diffused, and with a strong ’80s vibe. I love Zen, and rabblerousing Osho—who has turned the Emperor card into the Rebel—has infused the practice here with an electric, rebellious vibe, without sacrificing the stillness and quiet of the tradition.

Whatever you may think of Osho—leader, felon, visionary, egomaniac—he has left us a tarot deck with a pretty high level of intuitive intelligence. May we use whatever liberation we gain from our work with them for good.

5 Rituals for the Winter Solstice

Michelle Tea is the author Modern Tarot: Connecting To Your Higher Self Through the Wisdom of the Cards, several novels and five memoirs. She is also the curator of the Amethyst Editions imprint at Feminist Press. She founded the literary nonprofit RADAR Productions and the international Sister Spit performance tours, and is the former editor of Sister Spit Books, an imprint of City Lights. In addition, Tea created Mutha Magazine, an online publication about real-life parenting. Her writing has appeared in Harper’s, Cosmopolitan, The Believer, Marie Clare, n+1, xoJane, California Sunday Magazine, Buzzfeed and many other print and web publications.