Are Mushrooms the New Coffee?

Medicinal mushrooms—not to be confused with magic mushrooms, which have quite different effects—have been a mainstay of traditional Eastern medicine for centuries. In fact, Chinese doctors prescribe them to combat everything from head colds to cardiovascular disease. Now, these supercharged mushrooms are making their way to the West, popping up in tonics, powders and smoothies at juice bars and health food stores around the country.

What Are Mushrooms Good For?

Holistic healthcare practitioners credit medicinal mushrooms with everything from boosting the immune system to controlling blood sugar to fighting cancer, and more. Olympic athletes, like the Chinese women’s track and field team, have used medicinal mushrooms to build up their athletic endurance. Even western physicians like Andrew Weil, MD (a longtime proponent of medicinal mushrooms) recommend them to their own patients battling cancer. On his website, Weil states that “research has shown that Agaricus blazei [also known as himematsutake or almond Portobello] has anti-tumor and anti-viral activity, as well as moderating effects on blood sugar and cholesterol. It has also been used to treat atherosclerosis, hepatitis, high serum triglycerides, type 2 diabetes and some skin disorders. In Asia, it is widely consumed as an edible mushroom and also in extract form mostly for cancer prevention and treatment.”

A 2007 review of Agaricus blazei research concluded that the immune-boosting effects were most likely due to beta glucans, which are commonly found in fungi. This isn’t the only mushroom with proven medicinal properties: 2003 findings, published in Immunological Investigations, revealed that an ingredient in reishi mushrooms significantly enhanced immune response in patients with advanced-stage cancer. Meanwhile, a 2015 clinical trial on 52 healthy men and women, published in the Journal of the American College of Nutrition, validated that consuming shiitake mushrooms daily could help improve human immunity.

Where to Get Medicinal Mushrooms

Medicinal mushrooms aren’t necessarily the ones you’ll find at the salad bar or on your delivery pizza. According to Weil, even the little white button mushrooms in your produce aisle could contain toxins. That’s why he recommends cooking mushrooms at a high heat before consuming, and says the best way to get most of the benefits is in dried pill or powder form.

The FDA categorizes mushrooms as GRAS or Generally Recognized as Safe (though they don’t recommend you go out foraging on your own without a deep knowledge of fungi, as there are certainly poisonous ones out there). But you still should be careful where you source your supplements. “For daily or regular use, it’s important to get your mushrooms from a source where they’re organically grown,” says nutrition expert and raw food chef Sophie Jaffe. “Ideally, they should also be harvested in the wild, without exposure to contaminants.” Bodhi Tree recommends consulting your doctor for specific advice about the health benefits of mushrooms.

Lifehouse in Los Angeles sells elixirs like the Shroom Shake, an energizing blend of chaga, lion’s mane, cordyceps, maitake, resihi, shiitake and coffee (plus other good stuff like anti-inflammatory cinnamon and nourishing coconut oil). Medicinal mushrooms are classified as adaptogens, meaning they have a unique ability to adapt to the body’s needs and help it cope with daily stress, explains Tero Isokauppila, co-founder of Four Sigmatic, a purveyor of high-quality medicinal mushrooms that come in easy, single-serve packets.

What this boils down to is the fact that whatever perceived benefits you get from your morning cup (or two) of coffee, you can get from mushrooms tenfold, because they work with your body and not in spite of it. Four Sigmatic makes two mushroom coffees, and according to founder Isokauppila, the cordyceps mushroom version “increases energy,” while the lion’s mane “enhances mental focus.” Of course, the mushrooms alone would do the trick, but Isokauppila has found that the taste of coffee is easier on the palate, balancing the less-familiar, bitter taste of dried mushrooms. “Plus, some medicinal mushrooms like chaga can be alkaline-forming in our bodies, meaning that they ease stomach discomfort caused by acidic coffee,” he adds. In the end, Four Sigmatic uses only a small amount of actual coffee (100% Arabica, medium-altitude, pesticide-free instant coffee) in the formulation.

For non-java drinkers, the Golden Tonic Latte from Erewhon in Los Angeles combines reishi and chaga with ghee, coconut oil, honey and spices like turmeric, ginger and cardamom. Moon Juice, also in L.A., lets you mix their Vanilla Mushroom Protein powder into any of their vegan milks. Four Sigmatic also offers mushroom elixirs without the coffee for a boost in brainpower, immunity and relaxation, and Mushroom Hot Cacaos with reishi or cordyceps. But you don’t have to hit the juice bar for your daily dose of mushrooms. “We sell our mushrooms in individual powder packets, which makes them easy to carry with you and consume anywhere,” says Isokauppila. Add some to water, tea or juice for a nourishing tonic, or sprinkle a bit on your oatmeal, soup or salad, to give your meal a healthy boost.

A Guide to Medicinal Mushrooms

Chaga is full of antioxidants and helps to lower inflammation in the body while increasing immunity.

Cordyceps provides energy and can be used as a restorative or to enhance athletic performance. 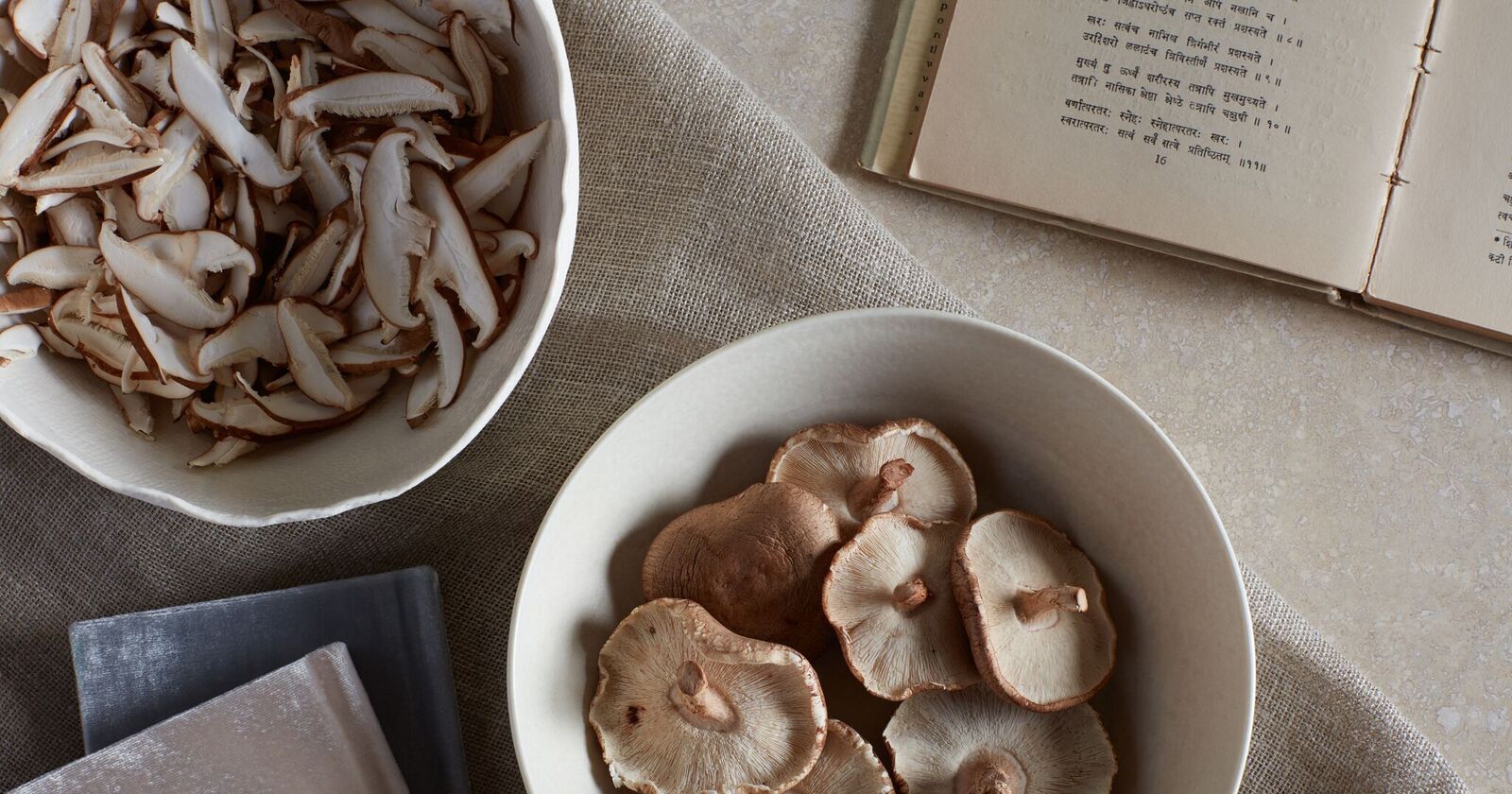 The Secret to Biodynamic Farming in Malibu

The Mystical Roots of Cannabis