What’s Your Coffee Habit Doing to the Planet?

There are many rewards to drinking coffee, including potential health benefits and increased energy, not to mention the enticing aroma and the daily ritual, bordering on obsession. On the flip side, we can certainly overdo it with coffee, as our nervous system will tell us. But there are other negative considerations to our coffee habit, too. Think about what it’s doing to the planet.

A 2014 study in BioScience claims the world’s coffee farms are becoming more and more harmful to the environment by growing coffee in direct sunlight, like GMO corn and soybeans, instead of under the shade of canopy trees. Full-sun coffee plantations can result in deforestation, loss of biodiversity and soil depletion, while leaving communities more vulnerable to flooding and landslides. According to the study’s authors, led by Shalene Jha of the University of Texas, while global production of shade-grown coffee has increased since 1996, the area of land used for non-shade coffee has increased at a much faster rate.

But there are things we can do to not only counteract this earthly damage, but help improve the planet as well, all while buzzing on our Morning Joe.

First of all, sourcing is key.

“Most cheap coffee [i.e., most grocery store brands] is grown by clearing land and growing it in monocultures using a lot of chemical inputs,” says ecologist Julie A. Craves, a migratory bird researcher and coffee drinker who writes about both on her Coffee & Conservation website. “More traditionally grown coffee is far better for birds and biodiversity.”

Craves says there are ways to ensure you’re buying coffee that’s sustainably grown. Look out for these labels:

In addition, Craves suggests choosing coffee originating from countries like Mexico, El Salvador, Nicaragua, Honduras, Bolivia, Papua New Guinea, Ethiopia, Peru and India. And lastly, look for 100% delicate, sun-intolerant Arabica coffee of the bourbon and typica varieties, which tend to be grown on small farms or 3,000 feet above sea level in rain forests, where rich soil nurtures the plants and the canopy shelters the berries.

Get To Know Your Barista

Andrew Hetzel, value chain consultant for the Coffee Quality Institute, says, “Good coffee is generally reflective of the treatment of the environment and people who produce it.” In others words, higher-quality coffee and more sustainable coffee-growing practices often go hand-in-hand.

To find the better coffee, consumers should build a relationship with the coffee retailer, and ask questions.

“Ask the retail purveyor for more information about the source of its coffee, not simply by geographic origin but by estate, and ask what sustainable business practices are employed by the supplier,” says Hetzel.

How to Curb Coffee Cup Waste

When discussing improving our daily coffee habit, the elephant in the room is the waste we inflict on the planet. According to “Kill the K-Cup,” an apocalyptic ad campaign protesting the environmental impact of the single-serve Keurig K-Cup, there were enough K-Cups discarded in 2014 to, if placed end-to-end, circle the earth more than 10 times! Nearly all of the non-recyclable pods end up in landfills—something even the inventor, John Sylvan, has publically admitted he regrets.

Thankfully, some eco-friendly options are now available for the one-cup brewing method:

Another way to curb coffee cup waste is as simple as bringing your own—and some retailers even offer discounts, including Starbucks, which gives customers a 10-cent discount when they bring in their own cup.

To give you an idea of what a difference bringing your own coffee mug can make, consider a March 2016 sustainability initiative at Dartmouth College. According to the college’s sustainability blog, students organized a “Cup-Free Library Week” in which free coffee was given to reusable-mug users, as well as other incentives. Based on the stats, if the program continued long-term, it had the potential of reducing disposable-cup waste in the library by one-third every month (about 33,600 disposable cups are used monthly; production of these cups require 8,400 gallons of water and 31,250 square feet of natural habitat, according to the blog).

Composting Coffee for the Garden

In addition to buying the most eco-friendly coffee and curbing waste, composting will make your coffee habit more environmentally friendly. And don’t worry—it’s not difficult.

“Besides layering my coffee grounds onto my compost pile, I prefer to apply them directly onto my garden beds about ¼-inch thick,” says Yvonne Savio, retired master gardener and coordinator for the University of California Cooperative Extension, Los Angeles County. “It’s easier and all the nutrients go directly into the soil, with nothing lost to leaching or evaporation.” 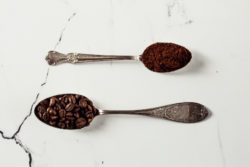 As coffee consumers, we’re not always plugged in to the ways in which our daily habit affects the world at large. While most of us can’t live without a morning cup (or two, or three), we can make conscious choices about the type of coffee we drink and how we drink it, turning our love of coffee into a socially responsible habit that contributes to a healthier environment. We’ll drink to that. In December 2015, at the U.N. climate negotiations, Conservation International (CI) announced the launch of the Sustainable Coffee Challenge, a call to action to make coffee the first sustainable agricultural product in the world. Kicked off with key partners including Specialty Coffee Association of America, Counter Culture Coffee, Keurig Green Mountain Inc., and Starbucks Coffee Company, it’s meant to benefit the lives of 25 million coffee producers, mostly small-scale farmers.

Brandon Bays on Healing Through an “Inner Journey”

11 Ways to Wake Up That Will Elevate Your Day

A journalist for more than 15 years, Jessica Peralta has written and edited for a wide range of publications and websites. Wellness is a subject she has enthusiastically covered as a journalist as well as pursued personally throughout the years. She’s always excited to discover new and innovative ways to make herself and her loved ones healthier and happier.