Indigo is experiencing a rebranding of sorts. While the plant-based dye’s lush blue tones have featured prominently on fashion runways from Ralph Lauren to Donna Karan, as well as at home furnishing chains like Pottery Barn, it’s more than just a trendy color of the moment. Once a colonialist crop used for exploitation, indigo’s present-day revival is helping to empower farmers and artisans—especially the women in Bangladeshi communities who previously faced starvation because of indigo cultivation. Indigo’s messy past mirrors the alchemic reaction that produces its namesake hue, which is actually an oxidation process that first turns fabric a puce green before the brilliant blue is revealed.

Indigo’s deep, inky blue may imbue a sense of serenity, but such calm belies the bloodshed behind much of the dye’s history. For centuries, European colonialists exploited indigenous peoples in the Indian subcontinent to meet the demand for the “blue gold.” An arduous process, the making of indigo dye required workers to labor in vile-smelling vats around the clock, attracting insects and disease. When the British began forcing Bengali farmers to grow the Indigofera tinctoria plant instead of rice, resulting in widespread famine in the region, the locals rebelled in the 1859 Indigo Revolt. It was only when synthetic indigo was developed in the late 19th century that natural indigo production waned.

The people in what is now Bangladesh were so traumatized by their history with indigo that, for generations, they refused to grow the plant for dye purposes. According to Mary Lance, the documentary filmmaker of Blue Alchemy: Stories of Indigo, Bangladeshi advocates of natural dyes faced strong resistance when they first tried to revive indigo as a way for the locals to earn a living. “People were using indigo as a cover crop but were not doing anything else with it,” says Lance.

The turning point in Bangladesh came when local farmers began producing indigo again for themselves. It started out slow, with one or two small development projects in the region. But soon, indigo production caught on, and today, the brilliant blue dye is the fuel for sustainable development, with its profits going back into the community to fund education, health care and infrastructure, thus changing the lives of its residents.

One such project is Living Blue, an artisan collective owned and operated by local farmers and dyers, which produces handmade, indigo-dyed kheta quilts, scarves and other textiles. For 58-year-old Momtaz Begum, Living Blue offered a pathway out of poverty. Married at 14, only to discover that her husband was committed to marry another woman, Begum left, pregnant and alone. In order to survive, she worked as a maid in exchange for food and shelter, often spending the night with her infant daughter in the kitchen or hallway of the owner’s house.

Over the years, Begum took various jobs so that she and her daughter could eat once or twice a day, working in rice paddies or stitching kantha quilts. Today, Begum is a director at Living Blue as well as a master quilter, supervising more than two-dozen quilters and training new artisans. Begum has also emerged as a community leader, championing the installation of low-cost toilet facilities in her village. She considers quilting her passion and a “way of meditation.”

“Many of Living Blue’s members share similar experiences in life,” says Mishael Aziz Ahmad, a Living Blue manager who started out as an intern himself. He cites another master quilter, Sona Rani Roy, who once lived in a 10-by-10-foot space with her four children and husband, who physically abused her. After she joined Living Blue, not only did Roy begin earning a regular income, “she was then perceived with more respect by her husband,” says Ahmad. In such villages, “women are not guaranteed dignity; rather, they have to earn it.” Roy and her family now live in a house with multiple rooms and a courtyard, her children all attend school, and she has traveled to the U.S. for an international folk-art market. Each piece offered by Living Blue represents that rise out of poverty to dignity through a passion found in creation and work.

“I think indigo attracts us because it is such a beautiful, deep color,” Lance says. “There’s something about the color that is so inspiring and restful at the same time.” And now that indigo has become a means for sustainable development, its enchanting blues are truly a symbol of serenity and inspiration. 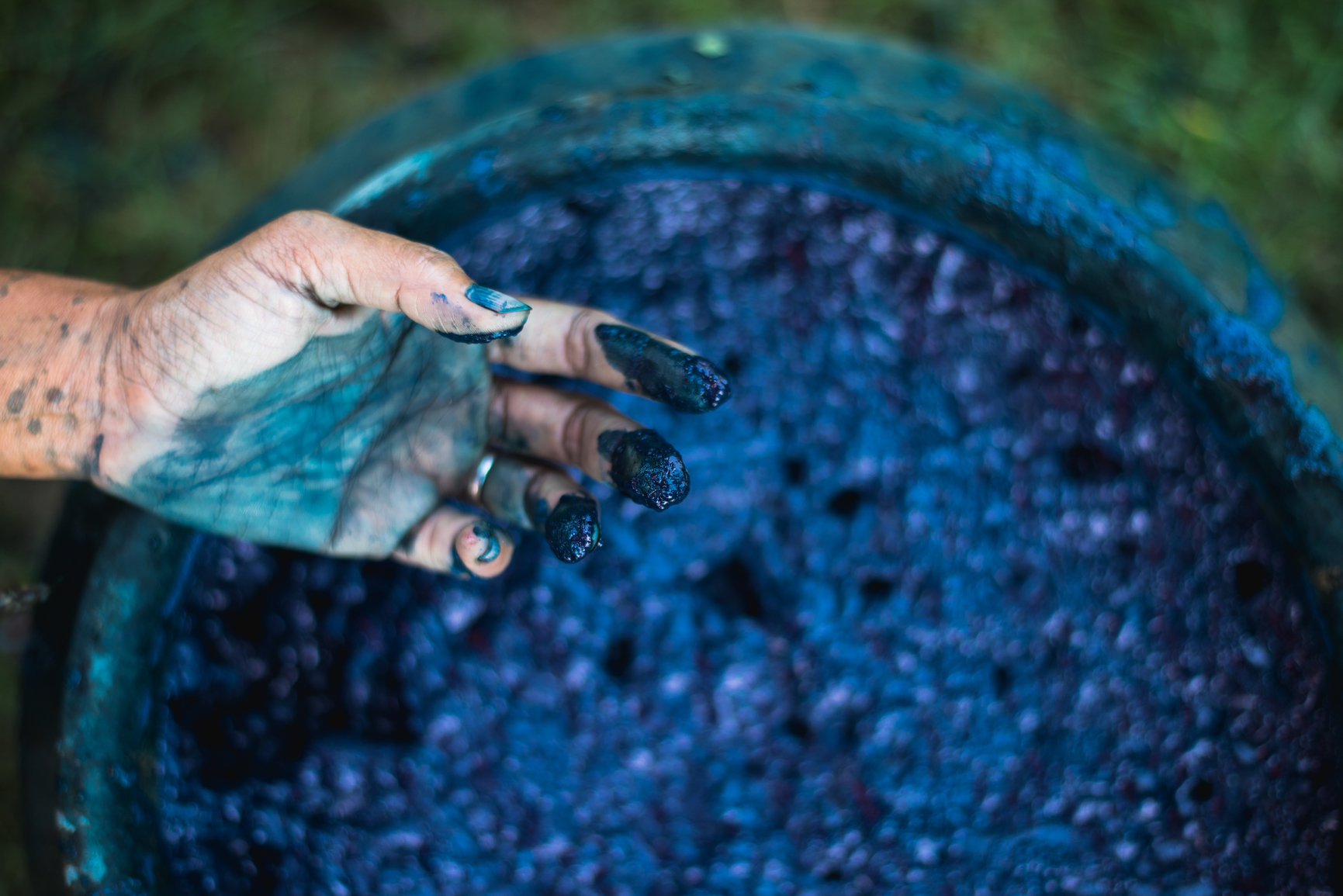 After a six-year stint in the law, Anna M. Park saw the light and turned to her first love: writing. For 12 years, she edited Audrey Magazine, the longest-running Asian American women’s magazine, and today edits Composure Magazine and writes for her beauty blog, Style Under Pressure.