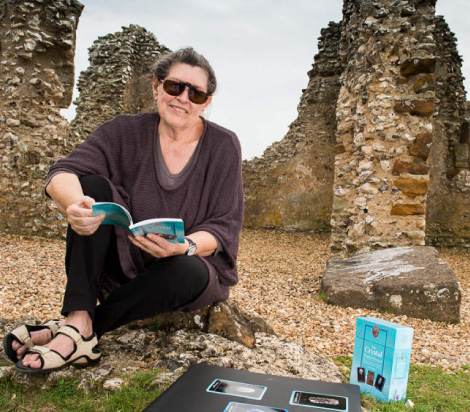 Judy Hall, one of the foremost experts on crystal healing and author of more than 40 books, has just released a sixth volume in her Crystal Prescriptions series: Crystals for Ancestral Clearing, Soul Retrieval, Spirit Release and Karmic Healing: an A-Z Guide.

With advanced degrees in cultural astronomy and astrology, Hall is a trained healer, psychic and counselor whose specialities are past-life readings and regression, soul healing, reincarnation, astrology and psychology, divination and crystal lore. Here is Part Two of our interview with her, where we asked her some in-depth questions about her latest A–Z guide.

Crystals and the Lesser-Known Chakras

Bodhi Tree: In your new Crystal Prescriptions guide you write, “Healing must precede evolution.” What do you mean by that?

Judy Hall: I sincerely believe that we are due to make a shift “inward, upward and outward” in our consciousness, raising our core vibrations. Which, as an astrologer, I tie to the move from the “sacrifice, sin and suffering” Age of Pisces to the much more humanitarian Age of Aquarius, on which we are about to embark [an astrological age lasts just over 2,000 years].

I also believe that we all carry karma, toxic emotions and ingrained beliefs—along with unfinished business, past-their-sell-by-date soul contracts and promises—from other lives and from our ancestral inheritance, and we can’t take that into a “New Age.”’ It just doesn’t work. So, we have to let go and heal those patterns first. That’s where crystals and crystal grids come in. They really do help us make that shift, releasing the past and, quite literally, opening our cells to an influx of new energy.

Fortunately, there are some extremely potent “new” crystals to assist that process and to facilitate the assimilation and grounding of the new frequencies. There’s no point in accessing these new energies if we don’t then ground them into our bodies—and into the planet.

BT: So how can we heal karmic wounds—personal, ancestral and those of the greater collective—with crystals?

JH: That’s what my books Crystals Prescriptions Volumes 5 and 6 are all about. It’s too complex a subject to go into in detail here. But basically, the crystals hold a space for us to work in and assist in releasing and transmuting the energies, creating an opportunity for something new to imprint.

BT: Most of us are familiar with the seven main chakras, but in your new book you discuss lesser-known, higher-vibration chakras—the Gaia gateway, the Earth star, the heart seed, past life, galactic and soul star, among them. What is their significance and how do you integrate them?

JH: This is something that required a whole book—Crystal Prescriptions 4: The A-Z Guide to Chakra Balancing Crystals and Kundalini Activation Stones— to explain. It’s not that these chakras are new—they’ve always been there and, in the past, magical or spiritual training was undergone to master, direct and control the action of these chakras. I liken them to higher resonances of the more traditional chakras. They enable us to connect to a much wider view of reality and the multi-dimensions of consciousness. When we use only the “traditional” seven chakras, we have a severely limited interaction and understanding of the multiverse around us. Fortunately, crystals assist in integrating the energies and heightened frequencies to which we are exposed. As I see it, that’s the function of a chakra.

BT: You write that personal trauma and transgenerational memories are also held in so-called “junk DNA,” affecting the karmic blueprint and our subtle energy fields. What is junk DNA and what is its significance?

JH: When I came across the term “junk DNA” it made so much sense to me. Briefly, it’s what the genetic scientists couldn’t immediately identify a purpose for when unravelling the secrets of DNA. It didn’t “code.” So, they called it “junk” and relegated it to the dustbin. All 98% of it. Maybe it’s time to think more in terms of a recycling opportunity. Because one thing is now certain: junk it is not. “Genie” might be a more appropriate expression. Junk DNA contains the family sagas, belief systems and attitudes, culture and expectations, transgenerational traumas and dramas that shape your world—and the potential to reshape it.

The late Joe Scogna, MD, likened our DNA to a computer memory chip with RAM (Random Access Memory), something we can all access—and reprogram. Junk DNA contains Transposable Elements (TEs), also known as “jumping genes,” that move (or jump) from one location in the genome to another. This means we can turn our genetic memory on or off, making use of those jumping genes. It has enormous implications for our health, wellbeing and evolution. Again, I’ve gone into this in much more detail in Crystal Prescriptions 6¸ especially as to how it relates to healing transgenerational traumas.

BT: Which crystals help to transform these fields?

JH: In my experience, by far the most efficient is a Brandenberg amethyst, which contains the pure blueprint before anything became imprinted. It returns energy to its most perfect state. But there are others. I particularly like the new ancestralite, as that takes the healing back down the ancestral line and out into the future, retaining the soul gifts and learning from the ancestors but releasing the trauma. Cradle of Life (Humankind), which comes from the cave where the first humanoid bones were found, is another useful tool. There are plenty more in Crystal Prescriptions 6 along with instructions on how to use them.

BT: How can the crystal Emotional Freedom Technique (EFT) be used to clear both our own karmic and internal issues and those of our ancestors? How does one know if it worked?

JH: Crystals add another level of energetic transmutation to EFT, and crystal EFT adds chakras to the conventional EFT tapping points. You can use the base, navel, sacral or solar plexus if this feels appropriate, going where your intuition and the crystal directs your hand. For karmic and ancestral work, you can tap the past-life chakras that run from the back of the ears down to the hollow in the base of your skull. Tapping takes you out of your rational mind by giving the thinking part of the brain something to focus on. This prevents it from censoring the information that arises into the intuitive mind and allows the patterns and memories in the brain to be reprinted.

One of the beauties of Crystal EFT is that you can use yourself as a surrogate and tap on your body for the benefit of someone else even when this is a past-life persona or an ancestor. So, if you know that there is a specific person who was the source of an ancestral issue or transgenerational trauma, you can tap as though you were that person. Or you can tap on yourself as you were in a former life. But, if you do not know the source, you can also tap more generally for the ancestral line, or yourself, as a whole. Again, detailed instructions are in CP6. You know it’s worked when you, and the family, no longer display the symptoms and effects of transgenerational trauma [listed in CP6].

The Scientific and Spiritual Benefits of Smudging