A Workshop with Michele Quan of MQuan Studio

Imagine a 500-ton Navy barge turned into art studio on the edge of a bay filled with painters, sculptors, potters and makers—and students of all ages and backgrounds learning from them. This is the summer scene at The Art Barge on Napeague Bay on the eastern tip of Long Island, New York, created in 1963 by Victor D’Amico, the founder of the education department at the Museum of Modern Art in New York. This is where we discovered one of our makers, ceramic artist Michele Quan of MQuan Studio, teaching the basics of pottery to groups of students over the course of two weeks. Her ceramics are hand-built or wheel-thrown, and each is painted by hand. We learned how to make a pinch pot and even a wall hanging. Here we share what else we learned from the master. —Martha McCully

Bodhi Tree: What was the first piece of pottery you ever made?

Michele Quan: I probably made a cylinder or a bowl. In the early ’90s I took a wheel-throwing class at the 92nd Street Y, and then 10 years later I spent a year of Saturdays at Third Avenue Clay in Brooklyn, where I would just sit and make pinch pots. A pinch pot is the most basic and primitive vessel. It’s made just using your hands to open clay and pinch out a pot.

BT: How did you go from pinch pots to tree hangings?

MQ: When my daughter was 14 months old, I started taking ceramics classes at Greenwich House Pottery in the West Village. I wanted to make garlands to hang in trees, as offerings. I envisioned someone sitting in their house and seeing a string of beads hanging from a tree, like prayer beads or prayer flags, immersed in the seasonally changing landscape.

The idea of adorning trees came from a few happy encounters that expanded my love of trees. Stephen Huyler’s show “Meeting God: Elements of Hindu Devotion” at the Museum of Natural History, the movie My Neighbor Totoro by Miyazaki, and a book I was reading about Shinto. God is in nature; it’s a manifestation of that that idea. 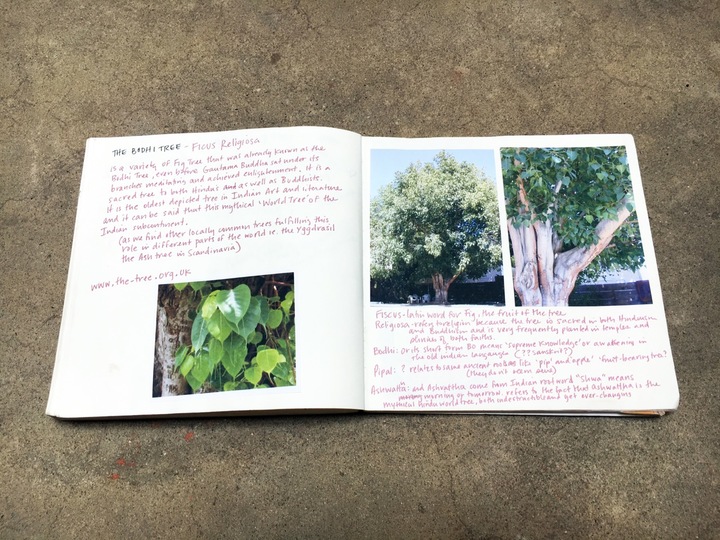 BT: You have a Bodhi Tree story that relates to trees, right?

MQ: I went to LA in the spring of 2006. I knew of the Bodhi Tree bookstore, and wanted to visit it; it was a kind of sister store to the now closed East West Books in NYC that I loved to browse. At Bodhi Tree, I bought a rainbow ornament that I still have hanging on my studio door. Afterward, I went out to the parking lot in the back and sat sketching and writing. There was a tree back there, I think it was a peepal tree, but I could be making that up.

BT: How did you start making bells?

MQ: I had a bunch of iron Tibetan bells hanging on the door to my studio that I had collected when I was making jewelry. And sometimes when you feel stuck, you just “do.” So, I made about 30 bells and they were a huge hit at my studio holiday party—people seemed to love them. And I realized that the bell had the same heart of the garlands I was making but were universal and I loved that.

BT: What is it about bells you love?

MQ:  I love that a bell is already an idea and a symbol unto itself, and then as you add images, it begins to layer the meanings. It’s also a beautiful thing that makes a sound, which is temporal and of the moment, an ode to the present.

BT: You often add characters or symbols on your pottery. Can you explain that?

MQ: I like to think of objects as a canvas, like the bell, which I can work on top of. The objects are in and of themselves something, but it’s interesting to layer another idea on top of it.

BT: Where do you find your inspiration?

MQ: I find a lot of inspiration in the ideas and iconography from Tibetan and Indian traditions, Hinduism and Buddhism. I get inspired from reading, from words, from ideas. The object or image is born of the meaning; they are connected and a transmitter for what it stands for.

One weekend when I was making jewelry and needed a break, I went to the bookstore of [New York] Open Center when it used to be on Spring Street, and I came across an amazing version of The Bhagavad Gita that had the Sanskrit on one page and on the other page was a direct translation of it, and then an interpretation. It was the Winthrop Sargeant version. Things like that. There’s nothing like going to a bookstore. I love the innate potential there: What can I learn? What can I see? What do the words conjure up?

BT: What about your wall hangings? How did you start making those?

MQ: The wall hangings were born from process. I had leftover pieces, like the donut holes of the beads that I was making. I picked one up and was absentmindedly pinching it into flowers and discs, and thought “these are so pretty.” That’s why I called the wall hangings PLTs, they are just Pretty Little Things, like eye candy. 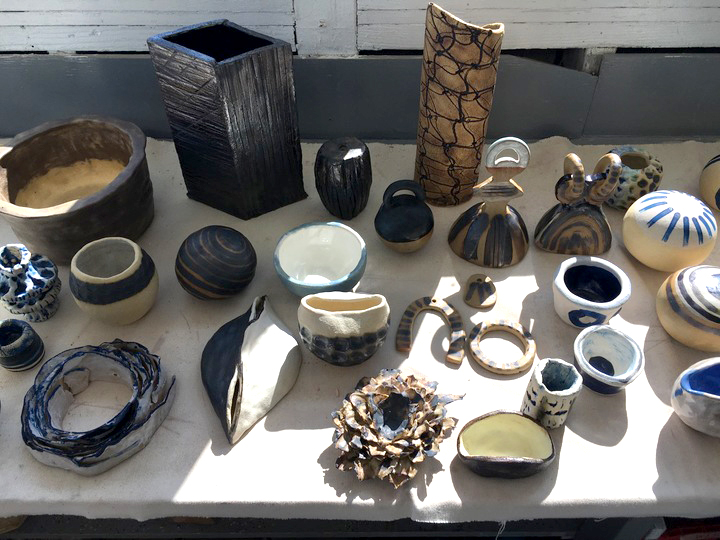 BT: What is it about clay you love?

MQ: Clay is so amazing in how it draws you in. You can move it, stretch it, pinch it; it’s instantly gratifying and very responsive to touch.

BT: Is there a connective thread to all of your work?

MQ: I think so. When I look back over my body of work, I can find the threads leading back to when I was at Parson’s School of Design. It’s all connected. 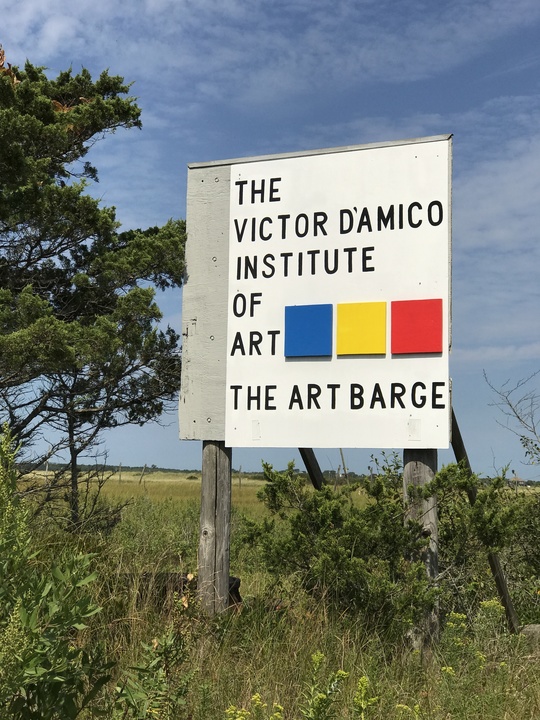 BT: Why did you decide to teach at the Art Barge?

MQ: This is the first time teaching a workshop here. Last summer, I went on a tour of the D’Amico house on the bay filled with their life of found art objects. You can feel the inspiration of Victor and Mabel D’Amico in their house and belongings—it’s amazing. I’ve loved these two weeks of teaching here on this serene bay, surrounded by people making art. I felt the same way when I experienced the holidays after my daughter was born, it was fresh again though her eyes. Here I get to experience clay again, without all my own expectations, and experience other people’s joy in working with it.

3 Reasons You Need Mushrooms in Your Diet