Conversation with an Artist 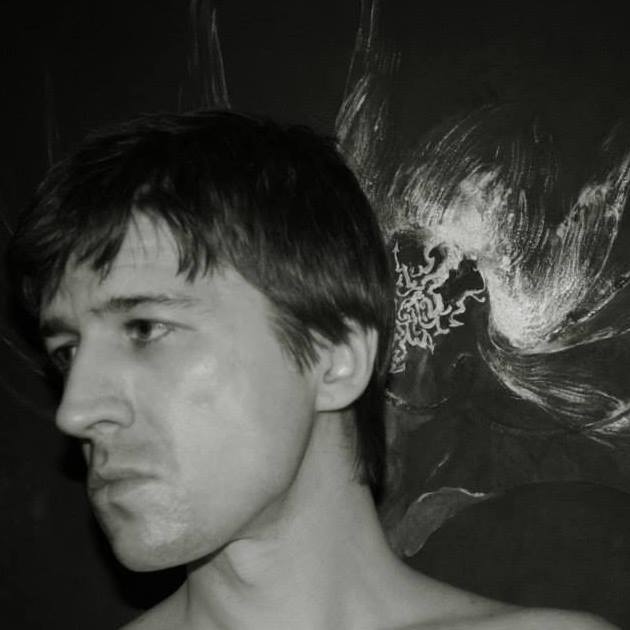 The Story of Denis Forkas Kostromitin

Denis Forkas Kostromitin was born into a military officer’s family in Russia in 1977. A curious student, he was fascinated by alchemy and energy, and studied works by ceremonial magicians Eliphas Levi, a French occult author, and Aleister Crowley, an English artist. The young scholar undertook his own philosophical investigations, which soon included studies of ancient Greek and Mesopotamian poetry and mythology, philosophy of language and various artistic traditions of antiquity. Forkas frequently visited China, where he met several native painting masters and also studied the Eastern painting tradition. Eventually, determined to find his true vocation, he took on the path of a professional artist.

Forkas’ paintings and drawings have been featured in many international music releases as album covers. The artist currently lives and works in Moscow. Bodhi Tree is featuring the art of Denis Forkas because of his commitment to capturing dream memories upon waking as a guide to the deep psyche, and as inspiration for art. —Justine Amodeo

The occult significance of dream visions rarely raises doubt. Even the Stoic philosophers of antiquity resorted to compiling evidence of cases of dreams that came true—notably Posidonius’ collection used by Cicero in his On Divination treatise—as a means of establishing an empirical foundation for their doctrine of fate.

The Influence of Ancient Greeks

Socrates, Plato and Aristotle all believed dreams granted knowledge of things concealed from an awake mind. Aristotle advocated that interpreting “visions of the blood” had to be performed with great caution, as he believed the dream process would distort projections received from a daemon [ancient Greek spirits or deities], and it was the interpreter’s job to recognize true symbols amongst grotesque shadows. Aristotle also denied the idea of dreams’ divine origin, as he failed to see why the gods would not speak to men while they were awake.

To Ancient Greeks, the daemons were “immortal souls”—entities unhindered by fetters of the material world and, as such, capable of transcending time. They believed that whenever a man lost awareness of the waking reality, his mind was aligned with that of a daemon and bits of daemonic memory were communicated to the sleeper: past, present and future—whole branches of the universal tree were revealed as a dream.

This ekstasis—or stepping out of myself—constitutes the first half of my two-fold talent. My personal experience forces me to agree with the Ancient Greek poet Hesiod when he chooses to associate dreams with threat (“And Night bare hateful Doom and black Fate and Death, and she bare Sleep and the tribe of Dreams”) and discards pleasant dreams as something not worth mentioning in Theogony at all. The somber air of my visions is quite persistent and I honestly can’t recall a single genuinely merry dream. This purely subjective observation brings us to the second half of the talent—that of a mantis, the interpreter of visions.

Oneiromancy (from the Greek oneiros, “dream,’ and manteia, “prophetic power or gift”) is a form of divination using symbolism as a method of interpretation. A skilled oracle is essentially a psychologist who would interpret symbols through the prism of a dreamer’s personality, profession, physical and mental health, fancies, prior and recurring dream accounts, etc. I imagine in our—mine and Hesiod’s—case, the grim overtones are set by various traumatic experiences, as other people’s reports provide ample proof that there are much jollier prospects out there.

It is important to capture dream memories right upon awakening, as they are quickly substituted by second-hand memories and thus make interpretations dramatically less accurate. Besides, now and then I will witness a scene so foreign that I can’t help but agree with Egyptian priests who believed the soul gained access to a different universe while the body was asleep. So I keep a pillow notebook within a hand’s reach for quick notes and sketches like any diligent explorer should. [This journal and pen can help you capture your own dreams upon waking.]

Naturally, this small introduction was not meant as a comprehensive essay on oneiromantic practices spanning from Mesopotamian poetry to Carl Jung’s studies of the unconscious. For the sake of brevity, I’ve mentioned just a few facets of the Greek tradition here, which seem to resonate with my own approach to the phenomenon.

The studies below and the accompanying notes do not include interpretations, of course. I offer this selection as evidence of the vast realm hidden behind the veil. I hope it will entertain you and inspire a journey of your very own. 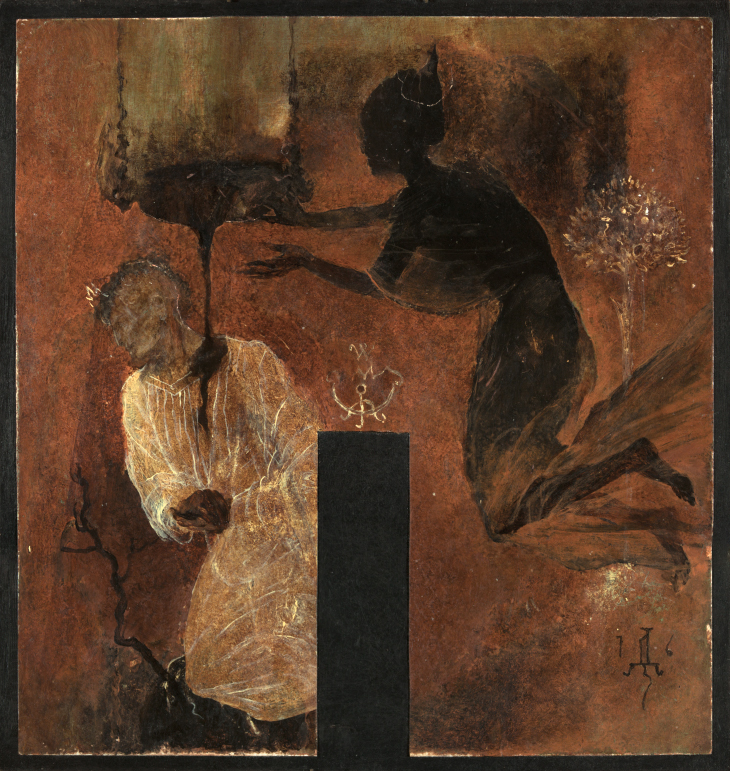 Between Two Worlds (study for a recurring dream of ichor baptism fashioned as a portico fresco cartoon), 2016

I have experienced the vision twice so far: In my childhood (around 1984) and last autumn.

I enter a concealed pavilion and immediately hear a soft female voice speaking an unknown language. There is something about the timbre that robs me of my willpower and I gradually lose control over my body. The sermon brings me to my knees and pulls me toward an imposing figure of a pitch-black priestess—her features and details of her attire flattened by uniform blackness. I realize before long that the voice is no more and the scene is now drowned in a solemn silence. The lady tends to a peculiar suspended vessel and places it directly over my head. At her slightest touch it tilts, and a warm, living substance pours down upon me. It covers me whole and eventually locks my body in this hard resin shell. A panic surge is quickly replaced by the most glorious sensation of myself imploding within the shell and falling endlessly through the soul’s looking glass into the unknown. 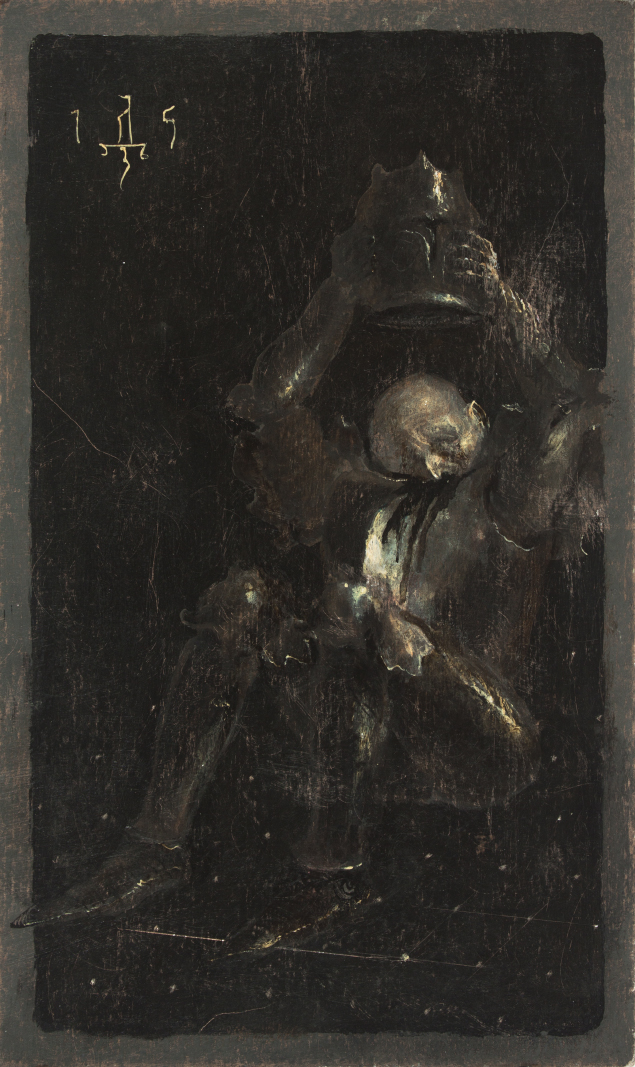 I find myself in an old workshop; the dark interior resonates with clanging and rattling coming from an alcove on the opposite side of the room. Upon getting closer, I start to detect playful gleams of metal, which soon coalesce into a tall figure in full suit of armor wrestling with an invisible enemy, silently. Soon the knight collapses on the floor right in front of me; he looks like a giant beetle being turned over on its back, his armored limbs moving independently of one another— a sorry sight! I can now see that whatever the man is battling against is within the suit. And yet he doesn’t yield to the seizure: He sits up and gets a firm grasp over his helmet, clearly attempting to remove it. In a frantic thrust, he pulls the helmet up above his head, which appears so pale that it almost glows in the dark. Blood spills over the neck edge of his breast plate, the knight’s face is marked by immense agony. Inspired by empathy, I manage to somehow read a word on his lips—a word that I failed to recall upon awakening—before the head is pulled into the deadly carapace. 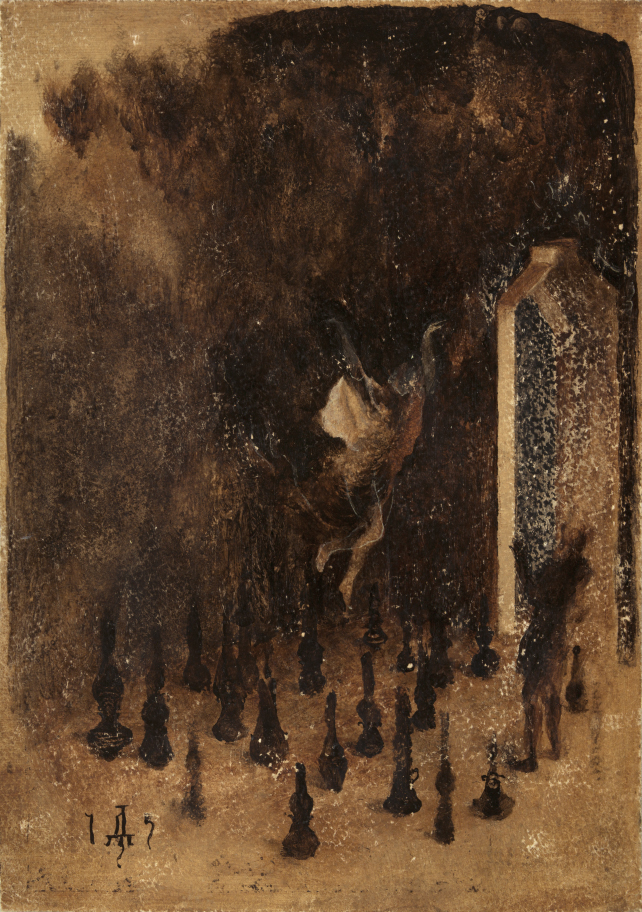 Yet another encounter with the ambiguous female character that keeps invading my dreams. This time she presents herself as an “ancient woman” (Lilith perhaps), who can only be summoned within a specific chamber of a labyrinthine palace. The chamber can be recognized by dozens of vessels or lamps set on its floor. Lilith sprouts directly from a wall as a result of some alchemical manipulations of mine, the particulars of which are unclear. Her body is never completely human; I have a feeling she is a homunculus conjured by the dream world/the labyrinth as a means of communication. We spend the day talking and exploring the palace; she keeps levitating slightly behind me and disappears at some point when I turn around to address her. In my dream, I enter the labyrinth many times and never fail to locate the chamber and summon the ominous entity.

This study is an important record because my dream seems to have been directly inspired by a very similar vision my son had experienced the previous night. In his dream, Lilith was summoned in the course of a sleep-like trance and emerged from folds of flesh covering the walls of a living maze. 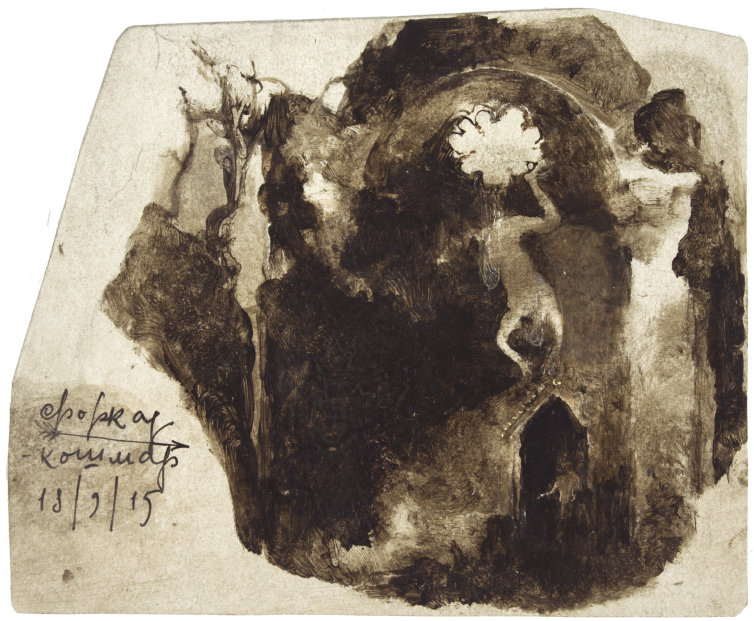 Upon entering the ruins in search of a relic, I get ambushed by a monstrous pale man who crawls down the wall. It occurs to me the man is actually the relic I’m after that got reanimated somehow. This small study is an attempt to retrieve the nightmare relic. 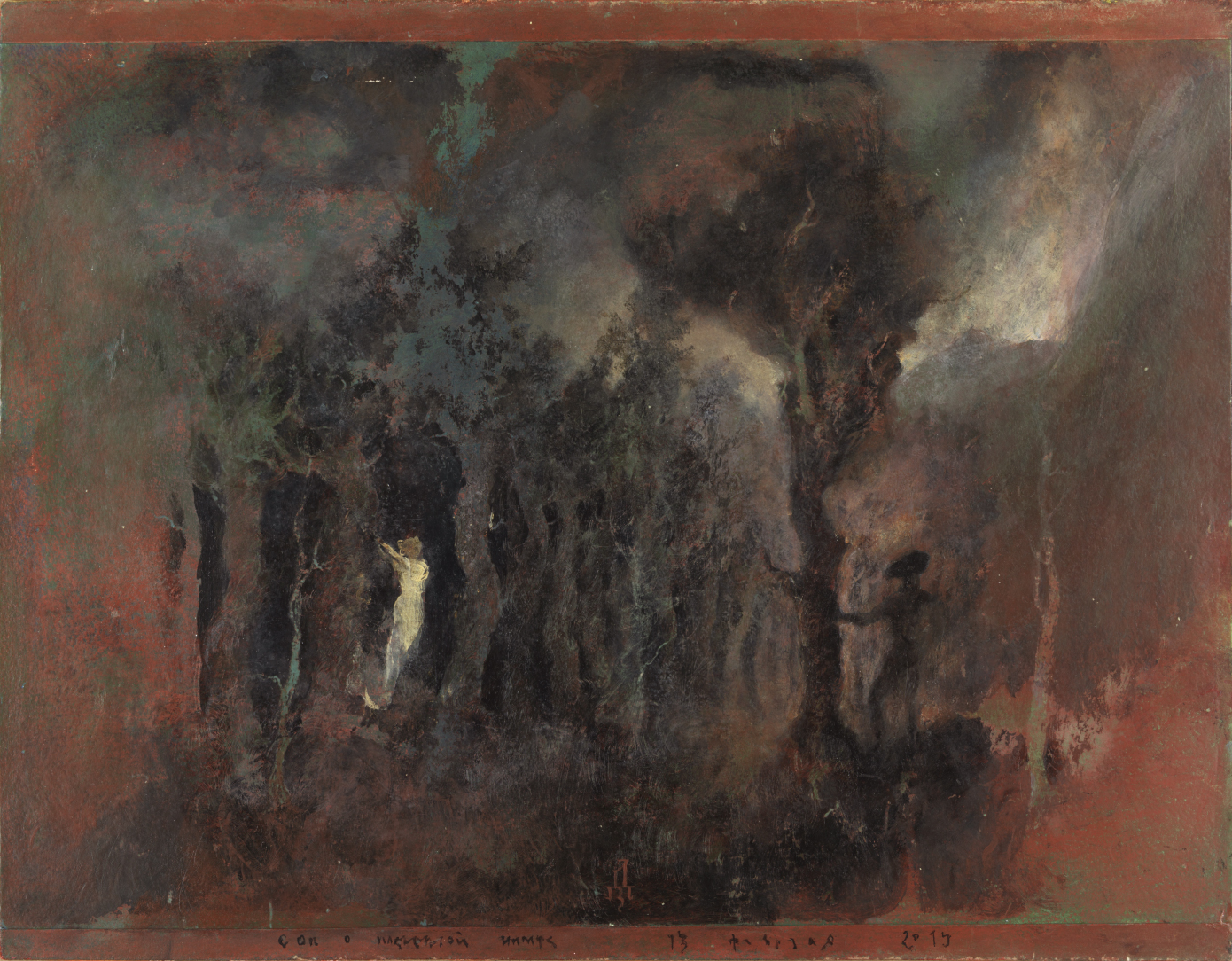 I hear a female voice calling for help while trudging through some gnarly thicket and rush to the rescue. After a good deal of wandering, I arrive at a small glade and see the woman tied to a tree in a rather peculiar fashion. She explains she is a forest nymph being used by “acolytes” as bait. She begs me to set her free but insists that I take my hat off first. The strange request inspires suspicion and makes me realize that I’m either the prey the acolytes are after or that there are no acolytes at all and I’m at the mercy of an evil witch here. The realization wakes me up. 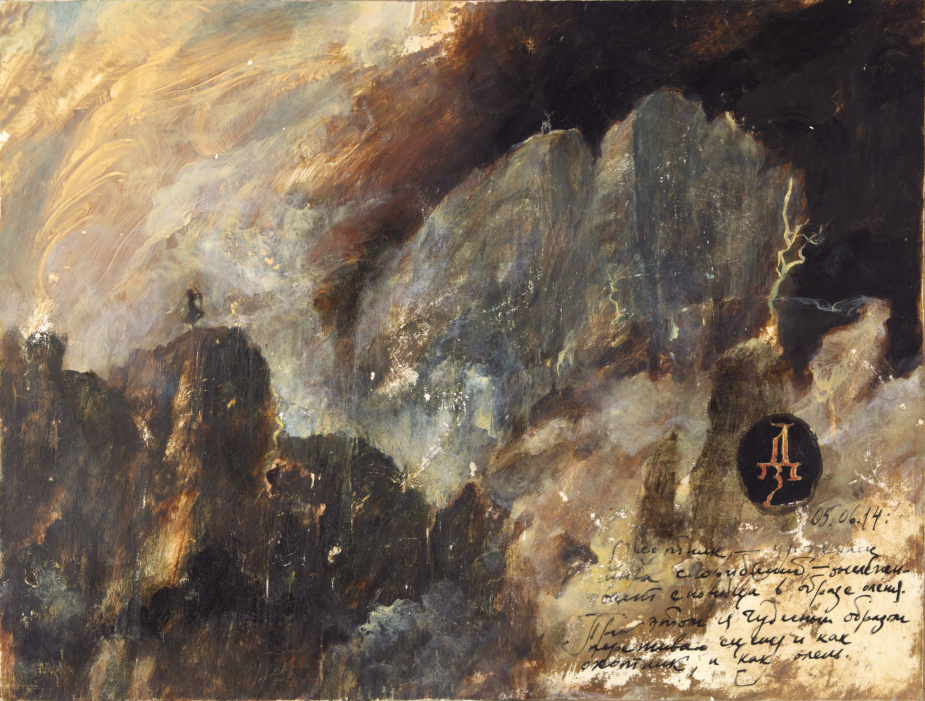 All images courtesy of Denis Forkas

Shakti Gawain on Awakening to Self-Acceptance

White Magic & Releasing Spells: Everything You Need To Know