10 Things You Can Do to Improve Your Sleep Now

By now, most of us know that our collective state of sleep is in crisis, yet skimp we do, knowing that lack of sleep can alter the way we think, influence us to overeat, lower our immunity, and prime us for a host of health problems including depression, diabetes, weight gain and premature aging. “In the last 15 years, there’s been an explosion of media attention on sleep and sleeplessness, and yet the sleep epidemic is getting worse,” says psychologist and sleep specialist Rubin Naiman, PhD, director of NewMoon Sleep and clinical assistant professor of medicine at the University of Arizona Center for Integrative Medicine.

The Connection Between Hormones and Sleep

Why? The myriad reasons are enough to keep sleep experts up at night. According to Prudence Hall, MD, founder of The Hall Center and a leading practitioner of regenerative medicine, hormonal issues are often at the root. “The problem is that our natural sleep and wake cycle is not just tied to the healthy release of melatonin and cortisol but to other hormones as well. So any imbalance can affect both sleep and our overall wellbeing,” says Hall. “Hormones impact our thoughts and emotions, so we may feel like we’re not living in alignment with who we actually are.”

Since this can lead to a cycle of more stress and insomnia, it’s no wonder that finding ways to sleep is now at the forefront of wellness. “I created some of my core products because I was sleep-deprived,” says alchemical artist Paula Ferraro, creator of Scents of Awe, a line of organic essential-oil-based skin care. “As a co-sleeping mother, I needed to fall asleep and stay asleep, and scent is so powerful, it helped me and allowed me to help others.”

The Importance of Feng Shui in the Bedroom

Similarly, feng shui expert Karen Rauch Carter finds herself devoting extra time during consults to tweaking the bedrooms of nonsleepers. “It may seem obvious, but I’m always telling clients that the bedroom shouldn’t be used for anything other than sleep or passion. If you have things incongruent to sleep in there, you’re setting yourself up for those things to draw your attention,” she says. Electronics (no surprise) are a growing problem. “I call it ‘being in the wire’ because our homes are so wired now. And it’s not just phones and computers, it’s also electronic trackers or sleep apps. I say practice prudent avoidance because if it’s tracking a wireless wave, then it’s radiofrequency that’s impacting your body and your sleep.”

So how do we let go of stress and the things that ultimately keep us wired? Naiman suggests it begins with a shift in perspective to viewing sleep as sacred rather than secondary. “The problem is that billions of us believe in what I call ‘wake-ism.’ We think waking life is where it’s at and we don’t value sleep and dreaming,” he says. “But if you look at spiritual literature—Buddhism, Hinduism, Judaism, the Muslim tradition, Christianity—there’s a similar notion throughout and that is that sleep is a profoundly deep, alternative state of consciousness, and one of great value.”

10 Ways to Improve Your Sleep

One concrete way to induce restorative sleep is to incorporate rituals that signal winding down to both body and brain. Beyond the basics of journaling, soaking in a tub spiked with magnesium (a proven relaxer) and sipping sleep-enhancing tea, these unique ideas from the pros are worth a test drive.

Negativity from nights of insomnia can get tangled up in your mind and your sheets, leaving you dreading bedtime. To create a shift, Ferraro suggests a ritualistic aura cleansing with ancient essences used by shamans, such as white sage, red and white cedar and silver fir. “Visualize your aura as calm, beautiful and ready for sleep, and let go of any drama you may be carrying from the day as you spritz the essences onto your sheets and over yourself.”

Meditation is a worthy part of pre-bed prep, but don’t keep your altar in the bedroom, says Rauch Carter, author of Move Your Stuff, Change Your Life and Make a Shift, Change Your Life. “Saintly symbols often have eyes looking back at you and I say, ‘No one else’s eyes in the bedroom but those that sleep there.’ They’re also all about the crown chakra, and you want to get out of your head at night,” she says.

“Aromatherapy is powerful and can induce sleep. By some quantifiable standards, it works better than some medicines,” says Hall. Lavender essential oil is a go-to sleep remedy for a reason: studies show it works. Ferraro keeps a bottle by her bedside and offers this therapeutic, sleep-priming tip: Place a few drops in your hands, rub them together and breathe in as you lightly whisk them through your hair.

“The bedroom should be a yin space,” says Carter. “That means small, cozy, cushy, soft, inviting and dark. Yang is big, loud, hard and bright. Sunlight, for instance, is the ultimate yang, so think more moon than sun in terms of what you keep in there.” Plush silk pillows hit the moon mark and limit drag on your skin and hair, helping protect both collagen and keratin as your body goes into repair and recovery mode at night.

“Especially a mirror that’s facing the bed,” says Carter. “If you can see yourself reflected back, it’s considered an energy-draining situation and you may find yourself always tired. If you can’t remove it, drape it with a muted fabric at night.” One exception: A sloped ceiling can interrupt energy flow. In that case, place a mirror facing upward on a high shelf or armoire so that it catches the energy and deflects it away from you.

“The ritual of rubbing your feet at the end of the day is very harmonizing and grounding,” says Ferraro. “On the cellular level, we’re detoxing while we sleep, and that can be enhanced by applying a cream with calming plant essences like cape and roman chamomiles, tansy and frankincense. Then just intuitively work on tender spots. Clients have told me they sleep better after doing this.”

“Things like flowers, trees and stones convey stillness and have a geometry to them that feels inherently natural to our bodies,” says Carter. Images that would be counterproductive are those considered active and energetically yang, such as moving water or galloping deer.

8. Go dark for your health.

Melatonin is a powerful antioxidant, and studies have shown that lower levels may contribute to cancer. Hall cites one in which blind women were found to have half the incidence of breast cancer than sighted women have. “They’re in total darkness and have higher levels of melatonin. You need darkness to get the most efficient release of the hormone,” she says. So support your body’s hormonal software with a satin sleep mask and consider blackout shades, as new epidemiological research suggests nighttime light pollution in urban areas disrupts the circadian rhythm and REM sleep, says Naiman.

“We’re electromagnetic beings and even a simple alarm clock can wreak havoc on our rest,” says Hall. To remedy unavoidable plug-ins, Carter suggests moving the object far from your head and placing a piece of cobalt blue fabric between you and the cords. “It’s a traditional feng shui ritual based on the idea that the chemical element cobalt is a magnetic metal,” she says. “You do it with the intention that the color will neutralize the EMF [electromagnetic frequency].”

“Tweaking things in the bedroom and in what we do before bed can work,” says Naiman, “as long as we transform our attitude toward sleep as well.” 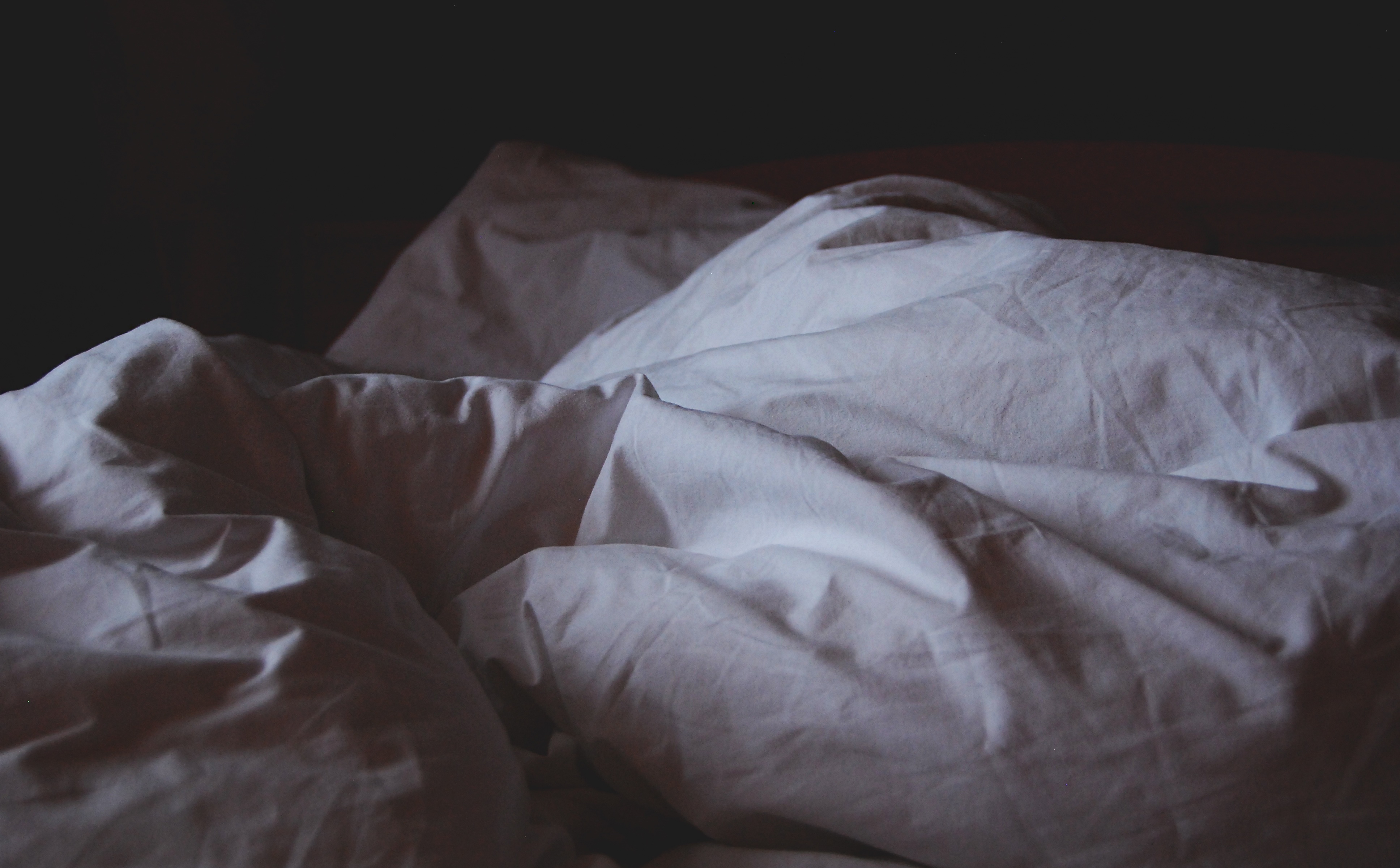 What’s the Purest Face Cleanser on the Planet?