How to Make Healthy Homemade Chai

A staple in coffeehouses and on college campuses, chai initially began as an Ayurvedic remedy. In the areas of Assam and Darjeeling, locals used the teas for their warming, circulation-stimulating and astringent benefits. Combining the tea with milk and herbs produced a healing and nutritive tonic, especially effective during the cold and damp seasons near the Himalayas.

We each possess a unique balance of the three primal energies (doshas)—Vata, Pitta and Kapha—and aggravating Pitta can lead to symptoms such as excess sweating, joint inflammation, heartburn and indigestion. These days, commercial chai is often highly sugared or caffeinated, and traditional recipes can excite too much heat and inflammation for those with too much Pitta in their doshic constitution.

This is why I created a chai blend that’s more tridoshic, to help balance all three doshas, while using organic, medicinal-grade herbs that support digestion and immunity.

A Lesson I Learned When Making Chai

There are many different techniques for preparing chai. I recently attended a workshop at a school for Ayurveda. While helping out in the kitchen, I noticed a giant pot of chai on the stove.

As I peeked over, I could see that there was a ring of small bubbles around the top where the liquid met the pot and a few small bubbles surfacing in the middle. As the smells of the spices filled the room, I went into my instinctive Indian-mother mode and almost reached out to turn off the flame on the chai. Not wanting to take over the third-year student’s kitchen, I asked, “Do you need help straining the tea?” Her reply was, “Yes, after it boils.”

I thought to myself, “It is coming to a boil,” but I kept quiet—her version of “boil” was obviously different from mine. Ten minutes later, the pot was continuing to bubble but the heat was on low. Another five more minutes went by and I was certain the chai was going to be ruined. By then, my Pitta nature was also on a slow boil. That’s when I ventured out a sweet, “Dear, if you let this go any longer, it may get too tannic and bitter.”

Her response was a curt: “That’s the way our teacher taught us to make it and so that’s the way I’m doing it—it has to boil.” Awkward silence filled the kitchen as the others all tuned in to what now had become a confrontation. I smiled and apologized for stepping on any toes and acknowledged the importance of following what her teacher had asked of her.

After I left the kitchen, I had several thoughts surrounding the interaction. Individual interpretation is inevitable. How do we define the boil we are looking for to signal the chai is ready? “Allow to come to a boil” can be an ambiguous direction; I’ve described a recipe for chai in this way before. Here, the Ayurveda student’s interpretation was that the pot needed to come to a vigorous boil. Had her teacher discussed how to adjust the chai process when making a large pot, and over different levels of heat? I’m not sure—and it didn’t matter.

What was at the core of this interaction was being closed. I decided to come to peace with how closed she was to my suggestion, and how closed I was to the possibility that this chai would taste good. We can only learn if we are open. I created space in my mind for yummy chai; maybe I would learn a better way of making it.

In this case, the chai turned out bitter and the milk was overcooked. But I learned an important lesson (which was facilitated by being the observer): At some point, we grow beyond following directions and develop an intuitive sense of how to do something.

I’ve been making chai since I was about six years old. I can tell when it’s ready because of the smell and look. There are subtle differences in the various nuances of preparation, such as putting the tea in the pot while the water is too cold, or waiting too long to add the milk; I’ve made all of these mistakes. One of the most potent forms of learning is direct experience—making errors to learn consequences and thereby formulate solutions. It is direct experience that allows us to develop an intuitive feel. This is why “practice makes perfect.” 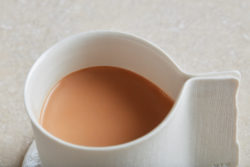 In general, I use one-part herbal mixture and two-parts Assam or Darjeeling tea. The traditional chai herbs are clove, cinnamon, black pepper, ginger and cardamom. All of these are warming, so I substitute different herbs (such as cooling fennel or turmeric) during the summer season or when my Pitta is high.

For one cup of chai:

Looking for more ways to enhance your health and wellness? Check out our remastered recordings of Bodhi Talks given by authors, healers, philosophers, teachers and scientists at the original Bodhi Tree Bookstore.

Siva Mohan, MD, MPH is an Ayurvedic practitioner based in Long Beach, California, who teaches Ayurveda at Loyola Marymount University in Los Angeles. She also holds a medical degree in psychiatry from Cornell University Weill Medical College and a master’s degree in public health from UC Berkeley. Explore Dr. Mohan’s articles, videos, online courses, and other mind-body-spirit goodies at ayurvedabysiva.com.