The Secret to a Great Grain Bowl

When Carolynn Carreño was 16, she threw her first dinner party. She made chicken on the grill, baked potatoes and iceberg lettuce salad for her friends. By the time she was 23, she had graduated to serving filet mignon, “cooked perfectly to medium-rare,” butternut squash purée, a Caesar salad and an apple crisp. She gathered her divorced parents and stepdad, all of her nieces and nephews, her father’s current wife, all of his kids (from wives one through four), and the wife’s sisters. The crisp recipe came from the chef at the restaurant where Carreño was a waitress, scrawled on the back of a ticket stub. It was her way of bringing her family together since she had just called off her wedding. Carreño knew that what she really cared about was not the groom, but sharing food with everyone she loved.

Turning a Love of Sharing Food into a Career

And she’s been doing it ever since. As a James Beard award–winning writer and author of 13 cookbooks—including co-author of Nancy Silverton’s A Twist of the Wrist, The Mozza Cookbook and Mozza at Home—Carreño says, “It’s basic human nature to share food. It’s a way to come together. That’s why everyone loves Thanksgiving.”

In her latest cookbook Bowls of Plenty, her first solo book and with a foreword by Silverton, Carreño shows how to cook and assemble a variety of healthy and, most importantly, delicious grain bowls—bowls for breakfast, salad, the main course and dessert. But these are not your typical scoop-and-serve brown rice bowls; the emphasis here is on being flavorful. “I’m a food person first, healthy person second,” she says. And so all of her bowls are compositions of ingredients with the right combination of acid, salt, sweet and bitter, something crunchy, a mix of colors, textures and maybe even temperatures, and layers of flavors. “Flavorful is when you are left satisfied, not wanting more,” she says.

The Secret to Flavorful Grain Bowls

Carreño’s bowls are indeed flavorful—and also easy to make. “A lot of people think a grain bowl is like a dart board, with seven different non-matching ingredients in separate compartments, with cashews on top,” she says. Her secret? Toss them. “It’s all about the vinaigrette.” Indeed, these look more like salads than grain bowls. An untossed salad, or “dressing on the side,” is her worst nightmare.

Carreño came to the Bodhi Tree studio to make two recipes from her new book, here shown in bowls by Caudron Mikaeloff Martine and in plates by Patricia Vieljeux. The Red Beet and Quinoa Salad with Hazelnuts and Goat Cheese was inspired by a salad from Gjelina Take Away in Venice, California. Her Coconut Millet Porridge with Bananas and Poppy Seeds uses millet, which is popular in Africa and India, so she paired it with coconut for the same reason. And if you’re wondering, it’s naturally sugar-free. To make the recipe completely vegan, caramelize the bananas in coconut oil instead of butter.

Carreño says she still is all about sharing food with her friends and family, gifting food, and inspiring readers to do the same. “It’s something anyone can do,” she says. “And it’s totally from the heart.”

Recipes from Bowls of Plenty by Carolynn Carreño 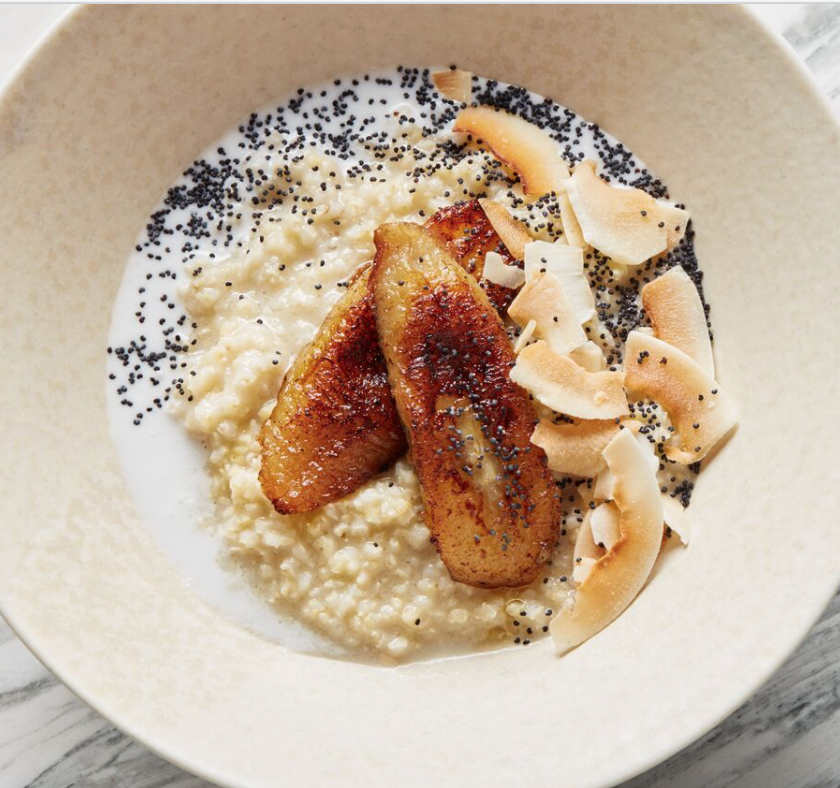 1 (15-ounce) can coconut milk, shaken
1 teaspoon ground cardamom (optional; use it if you have it)
¾ teaspoon kosher salt
1 cup millet, rinsed
2 ripe bananas
1 teaspoon poppy seeds, flaxseeds, or hemp seeds, or all of the above
1 cup unsweetened large-flake coconut
Cold coconut milk for serving 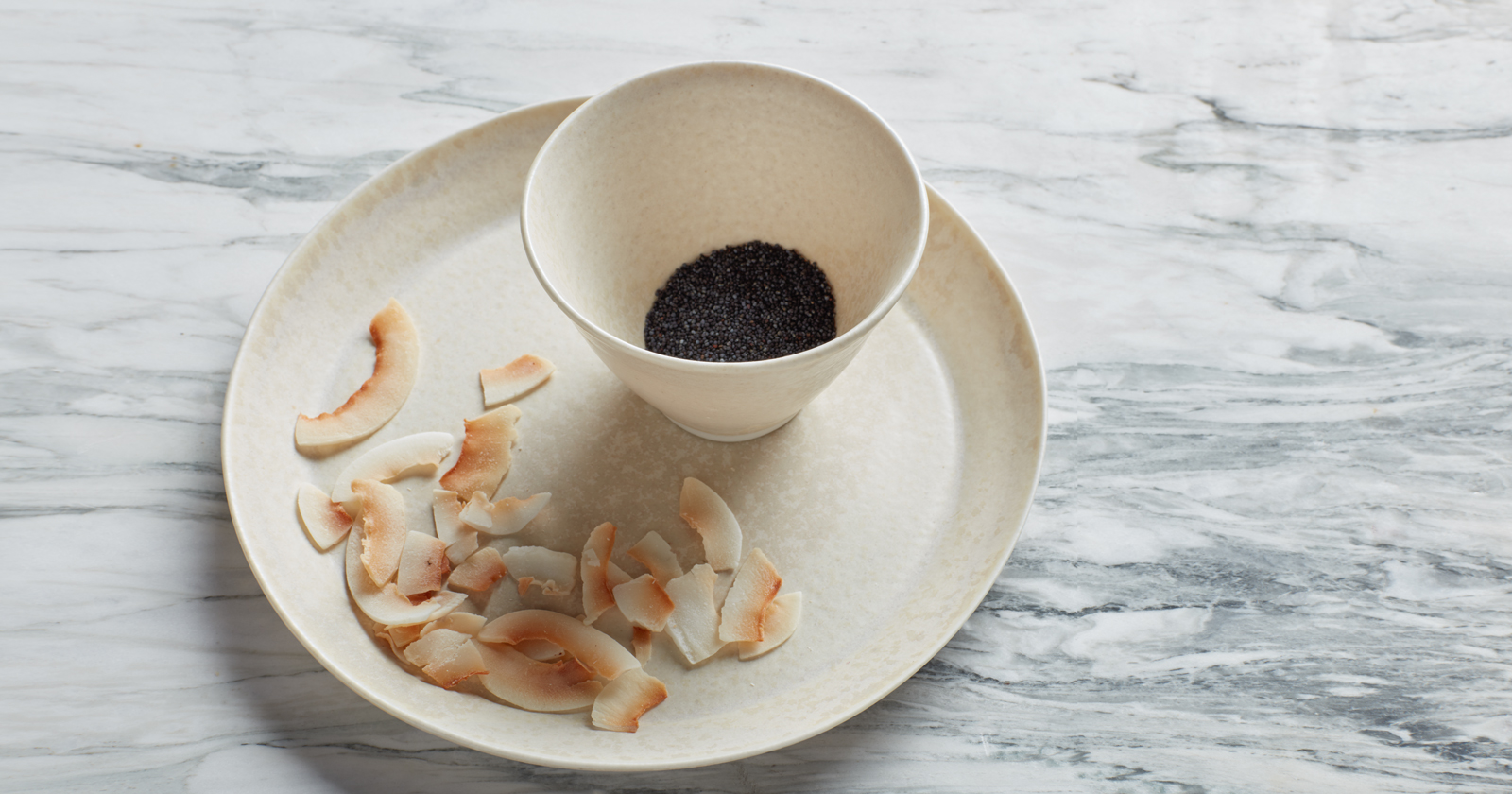 Pour the coconut milk into a saucepan. Fill the empty coconut milk can with water and add the water to the saucepan and bring the liquid to a boil over high heat. Stir in the cardamom (if you’re using it), salt and millet, reduce the heat to maintain a simmer, and cook, stirring often, until the millet is tender but not mushy and the liquid has been absorbed, about 30 minutes.

Adjust the oven racks so one is in the middle position and preheat the oven to 325°F. Scatter the coconut on a baking sheet and toast in the oven for about 8 minutes, until it is light brown and fragrant, shaking the pan once or twice so the coconut doesn’t burn.

Spoon the porridge into four bowls. Peel the bananas and slice them over the bowls so the slices fall onto the bowls. Sprinkle the poppy seeds and toasted coconut on top and serve with coconut milk around the edges. 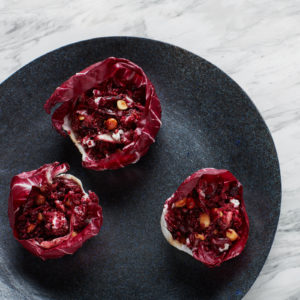 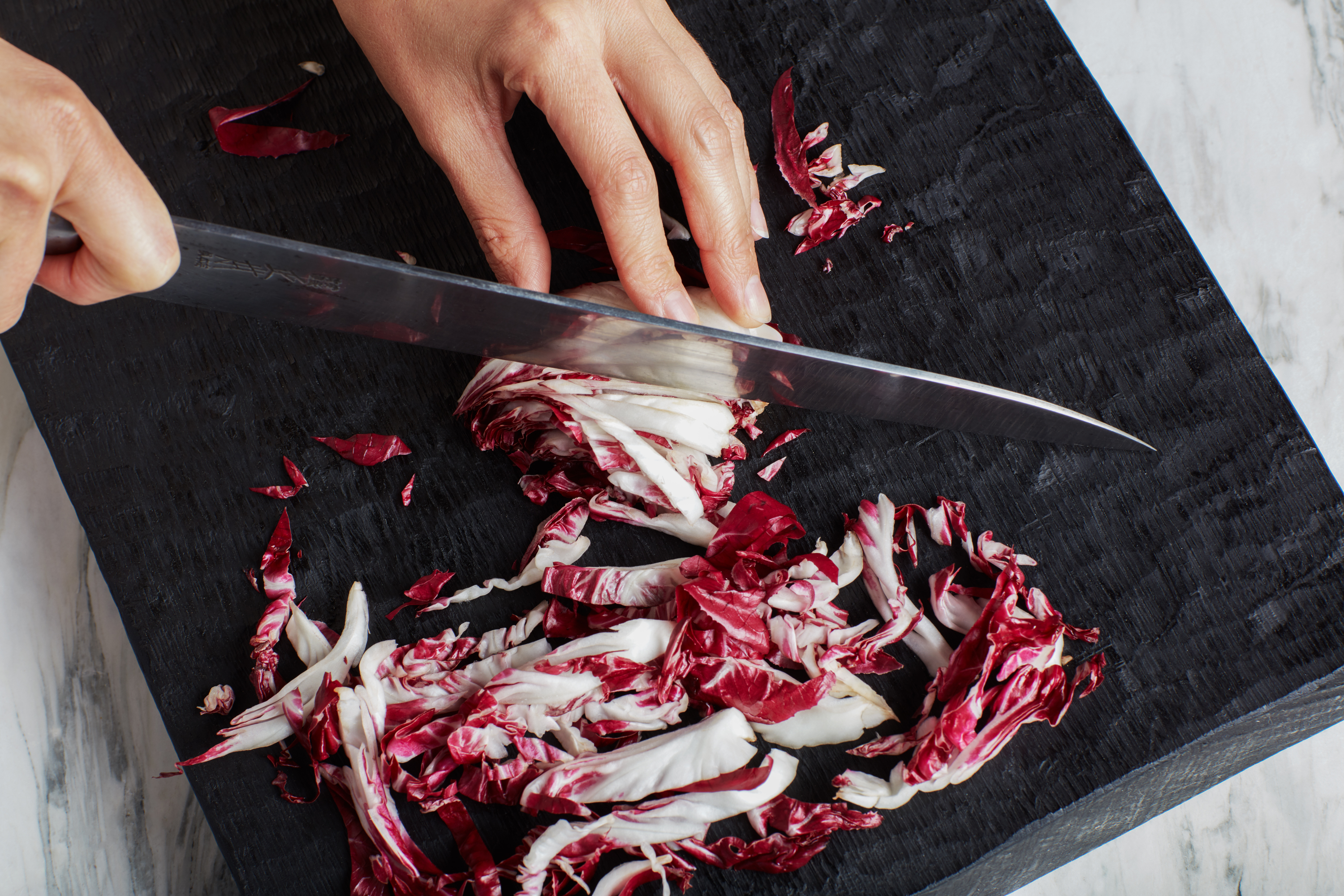 To prepare the beets, adjust the oven racks so one is in the middle position and preheat the oven to 400°F.

Rip off a piece of heavy-duty aluminum foil (or doubled regular foil) big enough to enclose the beets. Put the beets on the foil and season with the olive oil, salt and a few turns of pepper. Seal the beets in the foil and put the packet on a baking sheet. Roast the beets for about 1 hour 10 minutes, until they are tender when pierced with a toothpick or fork. Remove the beets from the oven and let the beets cool with the foil packets open. Peel the beets, wearing thin rubber gloves if you don’t want to stain your fingers, and cut into ½-inch cubes.

Meanwhile, prepare the vinaigrette in a bowl large enough to toss the salad. Add the shredded radicchio and beets to the bowl with the vinaigrette and marinate for at least 10 minutes. Add the quinoa and hazelnuts, and stir to combine. Add the goat cheese in bite-size clumps and fold gently to distribute the cheese.

For the balsamic vinaigrette (makes about 1¼ cups):

Combine the shallot, vinegar, lemon juice, and salt in a medium bowl and set aside for 5 to 10 minutes to soften the shallot. While whisking, slowly add the olive oil in a steady stream. The vinaigrette will keep, refrigerated in a cover container, for up to 1 week.

For the quinoa (makes about 3½ cups):

Combine the quinoa, salt and 2 cups water in a large sauté pan and bring the water to a boil over high heat. Reduce the heat to low, cover, and gently simmer the quinoa until the water has been absorbed, about 20 minutes. Turn off the heat and let the quinoa rest, covered, for 10 minutes. Uncover and fluff gently with a fork. Serve, or transfer the quinoa to a wide bowl or baking sheet to cool to room temperature if you’re cooking it to use in a salad.

If you want to take your nuts to the next level, after toasting them, toss them in oil and season them with sea salt before eating them or

adding them to a dish. Extra-virgin olive oil will highlight the flavor (not to mention the unique, bark-like color and texture) of any nut, but if you have them, toss walnuts in walnut oil and hazelnuts in hazelnut oil. I don’t recommend toasting nuts in a skillet on the stovetop. They don’t toast throughout, and more often than not, the exterior burns. Toast nuts in the oven.

Adjust the oven racks so one is in the middle position and preheat the oven to 325°F.

Scatter the nuts on a baking sheet and toast them in the oven, shaking the pan once or twice so they toast all over and don’t burn. You’ll know when they’re done when they’ve browned slightly and when you can smell the aroma of the nuts wafting from the oven after 12 to 15 minutes

Hazelnuts require one more step. You have to remove the skins after toasting them. To do this, after toasting the nuts, put them in a clean dishtowel, close the dishtowel to create a bundle, and roll the nuts around inside the towel. When you open up the bundle, the nuts will no longer be wearing their skins. Shake the skins out of the towel and send the nuts on to their destiny. 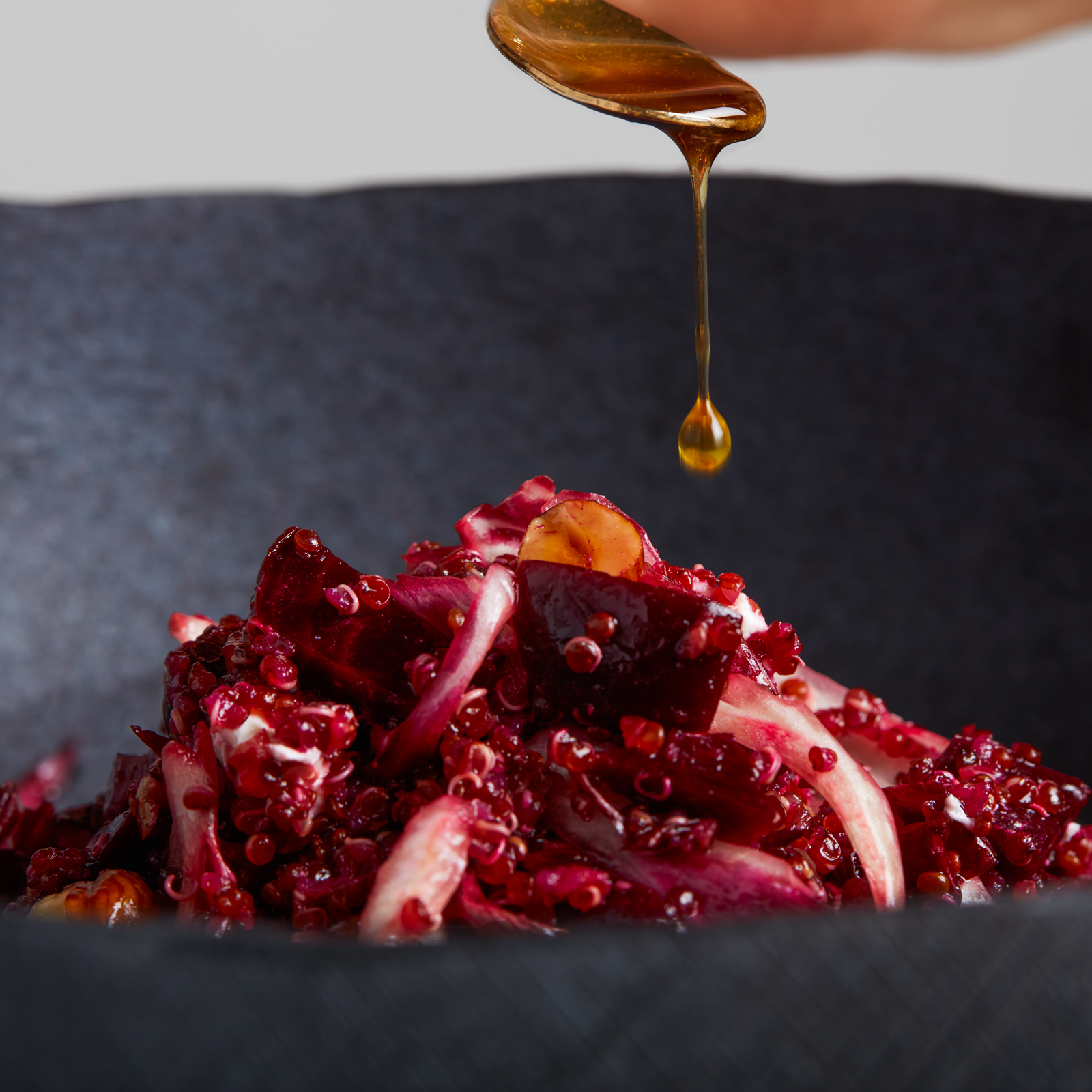 4 Energy-Boosting Elixirs You Need to Know About Now

One Woman’s Journey to Understanding Her Jewish Faith

Martha McCully is the Editorial Director of Bodhi Tree, and has started growing arugula in One Gun Ranch Supersoil on her back porch.