Smudging for Beginners: The Meaning of Sage, Palo Santo and Abalone Shells

Smudging is at the center of spiritual practices from across the globe. For centuries, this simple-yet-mystical tradition—in which palo santo, sage and other cleansing plants such as sweetgrass are burned to signify the start of a ritual—has been used by a multitude of spiritual faiths, including Hindus, Buddhists and indigenous cultures in North and South America.

How the Practice of Smudging Works

Today, smudging has evolved into a daily ritual for a variety of seekers looking to attract and maintain good vibes in their lives. But how exactly does this ancient ceremonial practice work? The clarifying smoke released from smudging herbs emits negative ions that can uplift your mood and purify people, places and even objects such as jewelry, crystals and photographs from negative energy.

Much like washing your hands before the start of a meal, smudging is the act of cleansing your aura before you feed your soul through ceremony or ritual. Yet of the many sacred plants that have been used around the world for this purpose, indigenous cultures in North and South America believe that palo santo and sage are the most powerful.

The Benefits of Burning Sage and Palo Santo in Your Space

Please note: This information is not intended to provide medical advice or diagnose or treat any health conditions. If you’re experiencing issues with your health, please visit your doctor or a licensed medical professional as soon as possible. 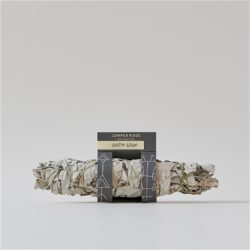 Sage originates from the Latin word salvia, derivative of salvere, a Latin verb meaning “to feel well and healthy or to heal.” Since prehistoric times, generations of indigenous communities in North America have smudged with what is now known as California white sage in ritual, ceremony and prayer for grounding, protection and peace.

When should I use sage? 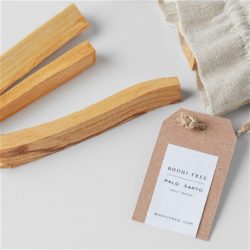 Palo santo translates to “holy wood” in Spanish. This sweet, fragrant tree from South America belongs to the citrus family and was used by the Incas, Shamans and medicine people for energy clearing, healing and spiritual cleansing.

When should I use Palo Santo? 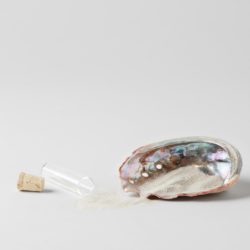 The abalone is a type of marine sea snail in the mollusk family, the same group as clams and oysters. These beautiful treasures can be used to catch the hot embers and ash created by lit smudge or burning charcoal disks with loose incense on top. Inside each shell is a dazzling layer of mother-of-pearl, giving it a colorful and mesmerizing iridescent allure.

From a spiritual perspective, abalone shells represent an offering from the ocean imbued with the nurturing energies of the water element: empathy, compassion, intuition and the divine feminine—which also makes them ideal altar tools for anyone looking to embody those qualities.

When smudging, make sure to place a natural substance like sand or sea salt in your abalone shell before you lay your lit smudge on top of it, as this will protect it from getting too hot and burning away the stunning pearly layer inside. 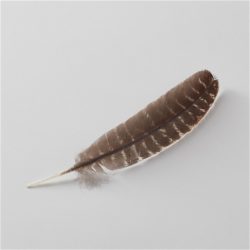 Used to help lift stagnant energy during a smudging ceremony, feathers transform the art of space clearing by guiding the smoke and energy into the wind to be cleansed. In the traditions of indigenous cultures in North America, feathers are considered sacred gifts from the sky, sea and the trees.

It’s believed that when the wind carries a feather onto the surface of the earth, with it comes a special link to the bird it belonged to as well as to the universal source of creation that connects all living things to one another. In smudging rituals, many types of bird feathers can be used, from the crow for balance to the eagle for courage, each possessing its own intricate meaning and purpose. But today, one of the most commonly used smudging feathers comes from the turkey, a cherished symbol of abundance, pride and fertility.

New to smudging? Or looking for a new way to bring it into your practice? Try this simple ritual:

STEP 1: Collect your tools and open a window.

Gather your smudge bundle or palo santo stick, a lighter, a feather, an abalone shell and a small handful of sand or sea salt grains to protect your shell from the heat of your smudge. Open a window to keep the smoke moving (and prevent the smoke alarm going off). Keeping your space ventilated during the ceremony also helps to transmute and shift any stagnant energies.

Tilt the smudge at a 45-degree angle.

Light one end of the bundle and rotate it in a circular motion around the flame so it’s fully lit.

Gently blow on the smudge after every rotation around the flame until the smokiness is to your liking. Pour the sand or sea salt into the shell to protect it from heat, then place the lit smudge inside.

TIP: Do not create too much smoke, as it could oversaturate your space and even set off fire alarms despite having the window open.

Gently wave the feather through the smoke. Start by smudging all corners, doorways, sacred objects and any other areas of your space that you feel need an energy clearing.

When finished, run the feather through the smoke one last time to clear away any energies it made contact with during the smudging. Then, once your space has had time to air out, close the window to seal in the good vibes.