Stumbling upon the similarities between wolves and people by chance, a wolf sanctuary in Southern California works on healing the emotionally wounded, both human and lupine. Deep trauma, such as abuse, neglect and abandonment, leaves emotional scars that can feel nearly impossible to overcome—even for wild animals. At Wolf Connection, sensitive souls and at-risk youth seek solace with the pack, overcoming traumas and painful pasts.

In 2009, family interventionist Teo Alfero’s life took an unexpected turn when his local animal rescue received 16 wolf dogs. Already the father of one wolf dog pup, Alfero suddenly found himself the volunteer caretaker for the orphaned pack, maintaining their rigorous daily physical requirements while overseeing their recovery from abuse and neglect at the hands of their previous owners. Little did he know that this act of kindness would catapult him into a new life mission: transforming the lives of both wolves and

humans in need through his “wolf therapy” programs.

How Past Trauma Affect Wolves

While working with his rescued pack, Alfero discovered that wolves are deeply emotionally sensitive animals that carry the weight of past traumas until they can learn to trust again—a process that requires patience and understanding. Although they might seem like cute little dogs as pups, once they grow up into the wolves they are meant to be, most owners can no longer handle them. This often results in physical mistreatment, starvation and isolation. Since breeding and owning wolves for domestication is illegal in most of the United States, animal shelters are supposed to euthanize all wolf mixes upon arrival. Unable to be rereleased into the wild after living with humans, their only hope after seizure or surrender is finding a sanctuary to care for them.

The Founding of Wolf Connection

Alfero founded Wolf Connection in late 2009 with a handful of volunteers. Contrary to common perception, wolves are not just cold, calculated predators out looking for a kill—but they’re not your friendly neighborhood dogs waiting for a couch to curl up on, either. As a staffer says, “They make good wolves, but bad dogs.”

Situated about 50 miles north of Los Angeles, Wolf Connection’s rehabilitation program cares for the animals’ medical, physical and psychological needs while integrating them together as a true wolf pack. Understanding that every wolf holds its own role within a healthy pack, Alfero and his team slowly foster the potential within each wolf to develop the innate talents hidden beneath its mistrust, fear and aggression. 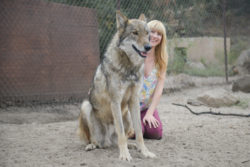 As the wolves began to flourish, Alfero drew parallels between his wolves and the children he worked with in the foster care system—the thousands of orphaned youth who also suffer from neglect, abuse and abandonment at the hands of those meant to love them. He wondered what would happen if he brought the wolves and children together to aid in their process of healing. From that one question, the true heart of Wolf Connection was born: to pair rescued wolves and disenfranchised youth to heal their pasts, rebuild trust and reach their full potential, both within themselves and in their communities.

Today, Wolf Connection is a wolf sanctuary and youth empowerment program that works to rehabilitate wolves and at-risk youth together. Now in its seventh year and home to 27 wolves and wolf-dog rescues, Wolf Connection guides youth from foster care programs and substance abuse rehabilitation facilities through an eight-week curriculum in which they work one-on-one with the wolves.

While it typically takes a full 28 days to begin to open up in a traditional 30-day therapeutic program, in working with the wolves, the kids begin opening up almost immediately. Giulia Cappelli, Wolf Connection’s lead of programs and human services, credits this to the power of directly participating in the wolves’ recovery. The animals model resilience, holding up a mirror in which the youths can see their own stories play out from trauma to triumph. Witnessing the wolves work through their fears and limitations while building self-confidence, the participants begin to believe, “If the wolves can overcome their hurtful pasts, then so can I.”

Wolf Connection’s success stories serve as inspiration for anyone struggling to let go of old wounds. One program participant arrived borderline suicidal after being prostituted by her father. After building a strong bond with one of the recovering wolves, she became motivated by the wolf’s ability to give life another chance in spite of all it had been through. After the program, she came back to Wolf Connection as a program assistant, and went on to graduate from high school and attend college as a nurse. She even began healing her relationship with her father.

A young male participant suffered from extreme anger issues, trashing his foster home and lashing out at his caretakers. At risk of being dismissed from the foster program, he started hiking the mountains with the wolves, finally facing his own fears and aggression. One day he went home, asked for a utility belt and started fixing everything he had broken around the house. He went on to graduate high school with honors as class president and enroll in college as a political science major. Wolf Connection now has a documented 70% increase in high school graduation and college enrollments and 80% decrease in destructive behaviors in their program participants—huge victories by any standards.

Wolf Therapy for All

Having moved into a larger natural-habitat facility in nearby Palmdale in summer 2016, Wolf Connection is expanding its outreach. A monthly community hike with the pack is open to the public, while private tours and group sessions can also be reserved. For people seeking their own healing journey, personal programs can be tailor-made to fit individual needs. Businesses are encouraged to work with the wolves for lessons in team building, leadership, fostering innate talents and collaborating within a group for the greater good.

As Cappelli puts it, wolf therapy is recommended for people “at risk,” but that pretty much covers everyone. After all, aren’t we all in need of healing our past, reclaiming our worth and becoming more fully alive? Luckily, the wolves at the Wolf Connection are standing by, four-legged guides ready to teach us that we can become the heroes of our own story, we can reach our full potential if we only try…and we are all in this together.

Visit Wolf Connection online for their monthly event calendar and more information on how you can get involved.

These 3 Steps Can Move You From Feardom to Freedom